The Bitcoin price has recovered from $3,600 to over $5,200, recording a 44 percent recovery within merely hours. The upsurge coincided with a 800-point upsurge of the Dow Jones Industrial Average (DJIA).

After a 9.99 percent drop in a single session, the Dow Jones entered deep into a bear market territory. It saw record-high levels of institutional sell-off, causing panic across the global financial market.

The severe correction of the Dow Jones led the Bitcoin price to drop to as low as $3,596 on major cryptocurrency exchanges like BitMEX, as the crypto market recorded its steepest drop in seven years.

Throughout the past week, Bitcoin and other high-risk assets have consistently followed the trend of the Dow Jones and the global equities market.

When a massive sell-off occurred in the financial market, the Bitcoin price dropped by a large margin, to the point of causing systematic errors on large-scale trading platforms that process billions of dollars of trades on a daily basis.

The swift recovery of the Dow Jones after its worst day since 1987 is noticeably alleviating significant pressure off of risk-on assets, which include Bitcoin.

“Equities markets are going to show a relief rally and a calmer day. The weekend will probably show more lockdowns for countries, through which we might find a short term relief on these markets in general. BTC should test some levels above us as well plus altcoins.”

The Bitcoin price is coming off of a near-50% drop within a two-day span, hovering in a highly oversold area. 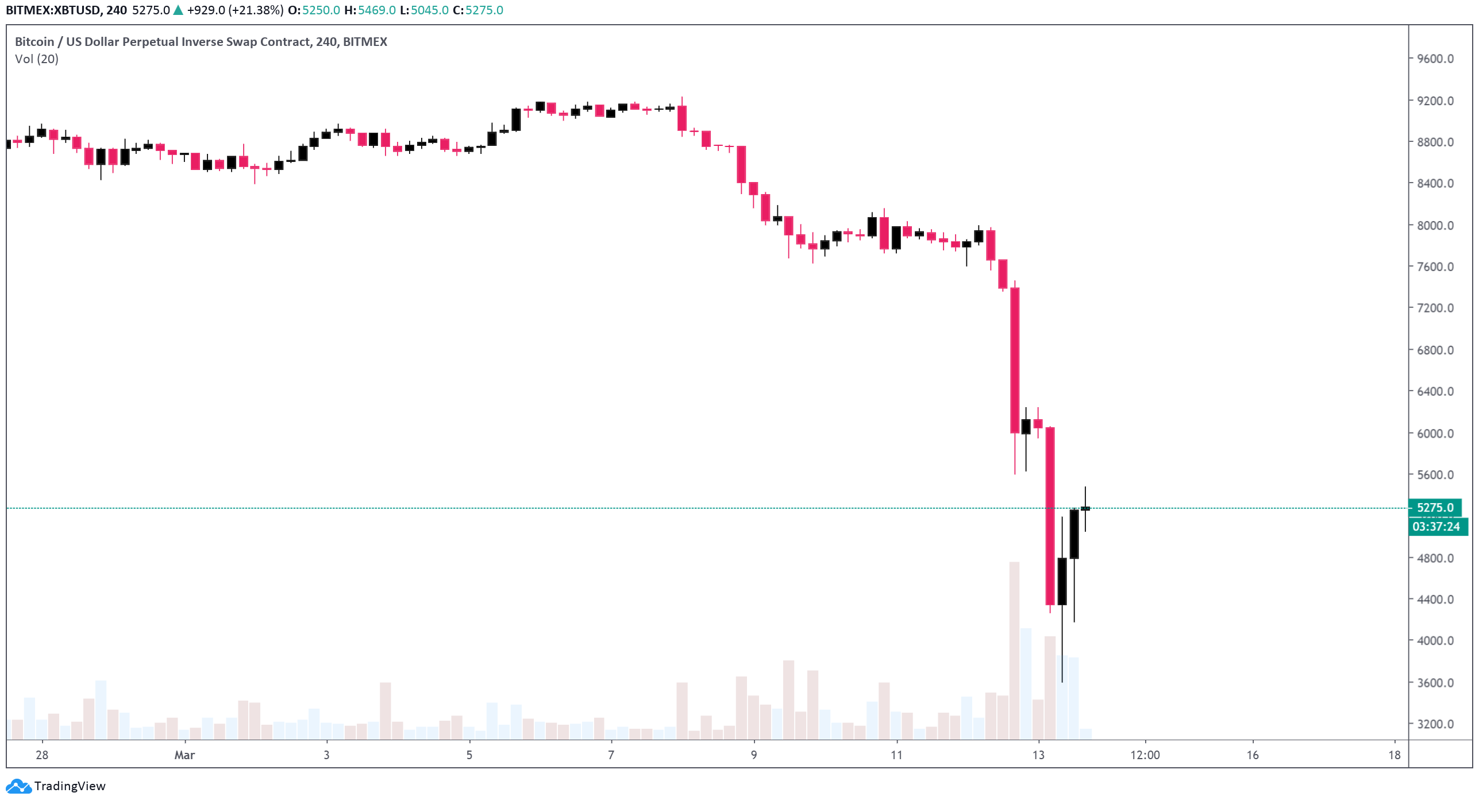 The Bitcoin price recovers by 44 percent on the day (source: tradingview.com)

Is there enough momentum to recover BTC to meaningful levels?

Historically, Bitcoin has been able to escape bear market cycles with the help of spoofers bring the Bitcoin price to key resistances.

Eventually, as the inorganic rally meets actual demand from retail traders and institutional investors, some level of fear of missing out (FOMO) is shown, causing Bitcoin to enter a bullish trend.

The problem with Bitcoin in the current environment is that it remains unclear whether there is sufficient appetite from retail investors to invest in cryptocurrencies even if the Bitcoin price begins to see a strong upsurge in the near-term.

When a rally is not supplemented with high fiat inflows and a large increase in the spot exchange market, it typically sees a severe sell-off in the near-term.

As such, for Bitcoin to see an extended rally throughout the months to come, stability in the U.S. stock market and a strong rebound of the Dow Jones remain are likely to be the two most important factors.