The Bitcoin price is recovering after a pullback from $10,500, a level that is widely considered to be a heavy level of resistance. Analysts anticipate a revisit to the $9,000s in the short-term, but the sentiment remains highly optimistic.

The last dip before the real Bitcoin rally

Ahead of the Bitcoin reward halving in late April that is set to drop the amount of BTC that is produced by miners by half, traders expect a strong upsurge to meet the breakeven price of mining.

After the halving, mining Bitcoin will not be profitable if the price of BTC drops below $13,000. For that reason, the market will either see a significant drop in mining difficulty or a substantial increase in the Bitcoin price.

Throughout the past two years, the hashrate of the Bitcoin blockchain network has increased consistently, climbing to new record highs every several months. Given the large mining centers and resources miners have established, it may be more likely for the Bitcoin price to rise to the breakeven price of mining rather than the hashrate falling off to meet the Bitcoin price.

Technically, the Bitcoin price is currently undergoing a minor correction. One technical analyst explained that support levels of bitcoin can be found in the $8,000s, particularly in the $8,250 to $8,600 range. If BTC does not break below the $9,000 level, solid levels of support are found at $9,200 and $9,500.

A drop to the $8,000s would indicate the most extreme bearish scenario for Bitcoin in the current market landscape. As such, it is far-fetched to predict a sizable pullback to mid-$8,000 while the bitcoin price hovers above $9,200.

But, in the unlikely case that the Bitcoin price declines to the mid-$8,000 region, a technical analyst said that it would mark the last dip before the real extended rally for BTC takes place. 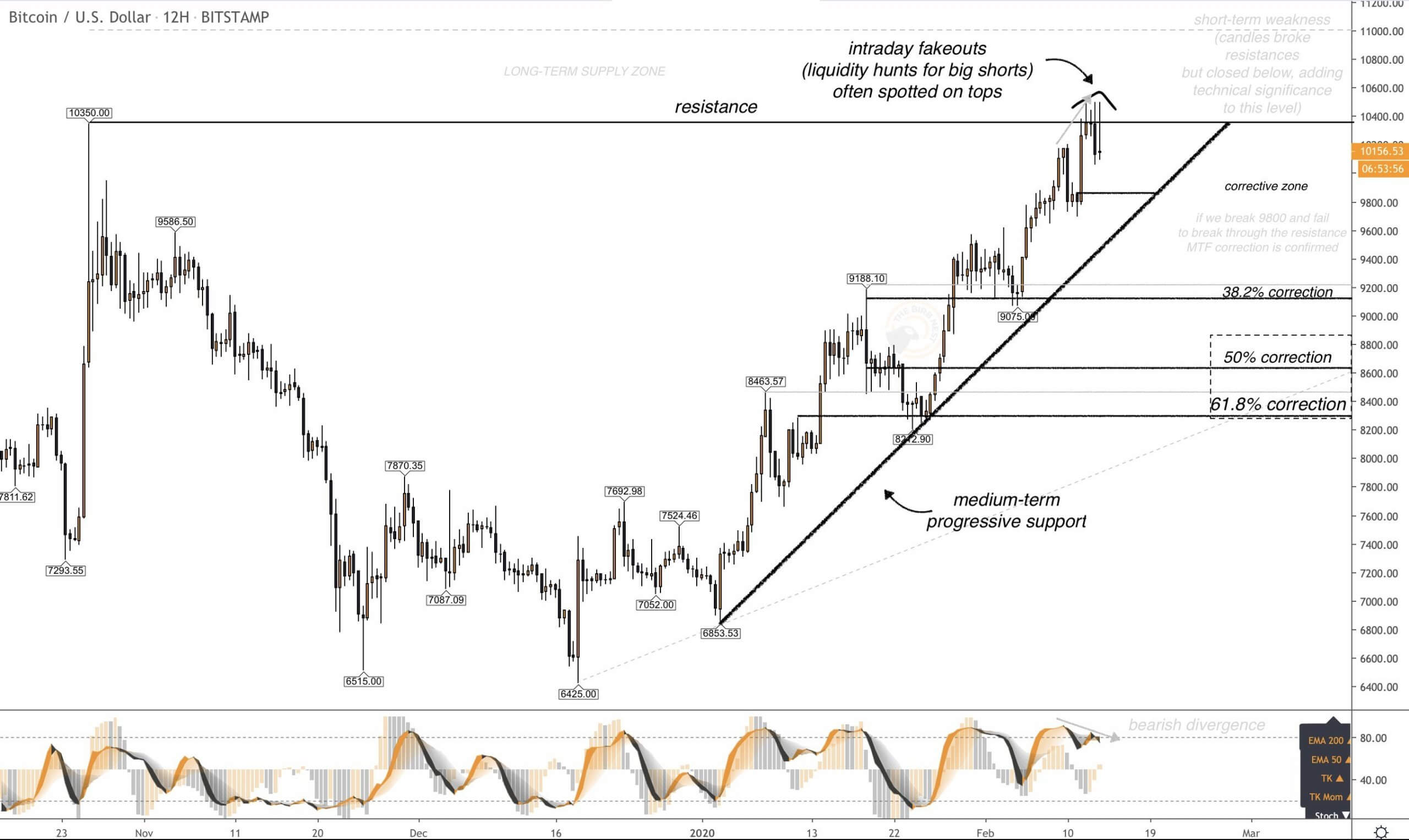 One major reason why traders are generally cautious about the Bitcoin price and anticipate a small correction is that the entire rally has been built on top of spoofers and inflated buy orders.

Much of the buying demand for BTC at the start of the rally came from margin trading platforms with highly-leveraged trades. That established a relatively weaker foundation for a proper full-blown rally.

A well-known trader who operates under the alias “Flood” said that Bitcoin has all three factors of a short-term pullback:

The high level of funding on BitMEX and other margin trading platforms incentivizes traders to short, as it forces long contract holders to compensate short sellers to provide balance in the market.

The post Analyst: After failing to break $10,500, here’s why a Bitcoin correction may be imminent appeared first on CryptoSlate.