On 25 September, crypto-trading firm Alameda Research minted the largest-ever quantity of Wrapped Bitcoin [WBTC]. News of the development was shared on Twitter by WBTC, with the tweet going on to note that the mint was worth 2,317 BTC, equivalent to $25 million.

Before Three Arrows, Alameda Research had set the previous record with most tokens issues in a single mint. As it reclaimed its throne, Sam Bankman-Fried, Founder of Alameda Research, challenged the CEO of Three Arrows Capital to keep the friendly competition going.

Despite the back and forth, Alameda Research has been leading the mint and issuance of WBTC with 37,609 tokens. On the contrary, others like CoinList and imToken followed with 28,162 and 8,991 WBTC, respectively.

Bitcoin’s demand on DeFi has been growing, including other platforms. According to data provided by Dune Analytics, the supply of WBTC has shot up by over 13,000% since January and has remained the most significant among other synthetic forms of BTC. As per Arcane Research, WBTC saw the most BTC locked, holding 67% of the total amount of Bitcoin represented on the Ethereum blockchain. RenBTC followed at the second position, with about 24% market share and HBTC with about 4%. 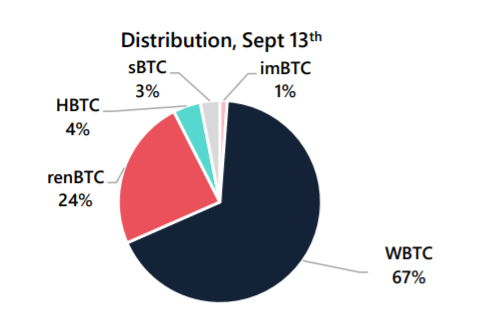 Bitcoin accounts for almost 5% of the TVL in DeFi now, indicating a rise in the share of DeFi capitalization represented by BTC which itself has risen by 150% in the past three and a half months.

At press time, DeFi Pulse was reporting the total BTC locked in DeFi to be at 125k. This was after the slump witnessed on 21 September, a slump that took the value of BTC down, along with the BTC locked in DeFi. The value on Monday had dipped to 82.16k, but quickly jumped back and, at the time of writing, was noting a peak.

The post Another record-breaking WBTC mint – Bitcoin demand on Ethereum to grow? appeared first on AMBCrypto.