The price of Bitcoin (BTC) is hovering above $18,000 following a massive short-term correction to $16,200. Barrons reported that “Big Money” is driving BTC and as such, it could potentially move higher.

In recent months, the Bitcoin market has seen an influx of institutional capital. Various on-chain metrics, exchange volume trends, and corporate figures, including Grayscale’s assets under management, have shown a continuous increase in institutional demand. 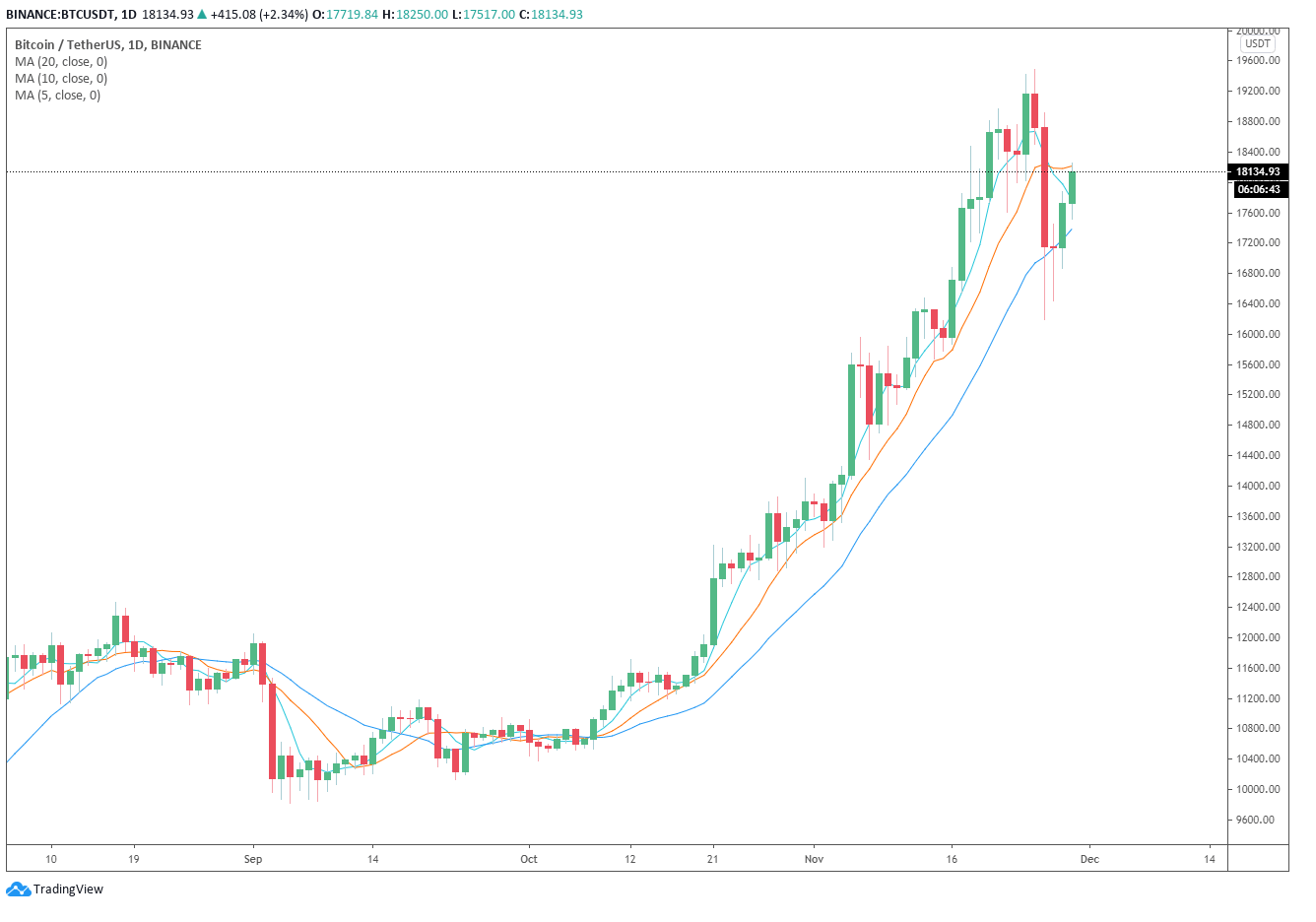 The 1-day price chart of Bitcoin. Source: BTCUSD on TradingView

Throughout the past three months, Bitcoin has rallied strongly, demonstrating a staircase-like rally. It rallied, consolidated, and rallied again, showing resilience and strong momentum.

Although Bitcoin saw a large pullback over the weekend, in general, the rally has been relatively stable since September.

The strong uptrend of Bitcoin might be due to the growing buyer demand from institutions. Large funds and high-net-worth investors are allocating hundreds of millions of dollars into Bitcoin.

Most recently, reports showed that Guggenheim’s Macro Opportunities Fund filed with the U.S. Securities and Exchange Commission to secure the right to invest up to $500 million into the Grayscale Bitcoin Trust.

“Guggenheim’s $5 billion Macro Opportunities Fund wants Bitcoin exposure. On Friday they filed an SEC amendment allowing them to invest up to 10% of their fund in $GBTC. A 10% investment would be worth $487M, and would be $200M+ larger than their next largest position.”

Immediately after the news started to circulate, Deribit found that the options market saw an increase in buyer activity.

Institutions investing in Bitcoin could fuel the market in two ways. First, when a household name like Guggenheim shows an intent to invest in Bitcoin, it buoys the overall market sentiment.

Second, when institutions buy Bitcoin, they create significant buyer demand because they typically invest tens to hundreds of millions of dollars at a time.

In the near term, some analysts are turning cautious toward Bitcoin.

Ki Young Ju, the CEO of CryptoQuant, pinpointed the stagnancy in stablecoin deposits as a concerning short-term trend. He said:

“When retail investors depositing under $25k stablecoins are active on exchanges, the market is likely to be a bearish or a fake bull.”

Despite the interest in Bitcoin stemming from the growing institutional adoption, analysts foresee a difficult near-term trajectory for BTC.

If the dominant cryptocurrency sees dwindling momentum, it could first consolidate or pullback before the next uptrend. But the variable remains whether institutions and their Time-weighted Average Price (TWAP) algorithms would cause a resurgence in BTC’s momentum as a new week begins.