Bitcoin has spent a month consolidating and whenever that happens, a large move usually follows. Following a buoyant start to the week, gains have been lost as BTC falls back to $8k and the bearish technical indicators have started to accumulate.

The charts look pretty ominous for Bitcoin. A large head and shoulders pattern has engulfed most of this year and that is usually a trend reversal signal that could spell the end of the rally that began in April.

This is also a major trend reversal signal and it last occurred at the end of March 2018. 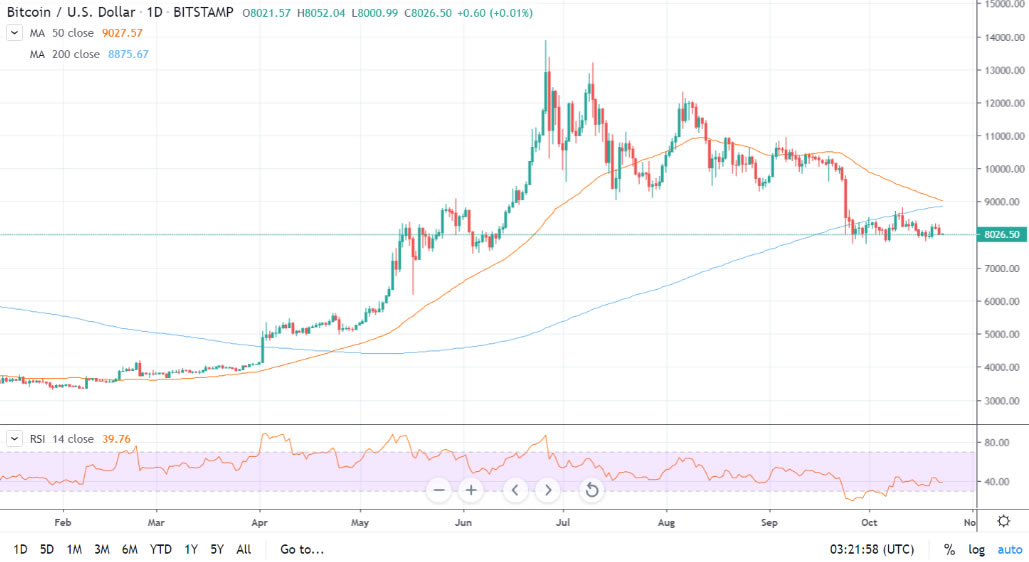 A year-long bear market followed and the opposing golden cross was not seen until April the following year.

These portentous signals could spell a return to crypto winter and late 2018 prices for Bitcoin, probably even lower for altcoins, many of which have yet to recover.

There have been several moving average crosses in both directions on the shorter four-hour time frame, and that too is bearish at the moment.

Another technical indicator is starting to squeeze and this one signals a larger move inbound.

Add that to the two above and you would not bet against it dumping this week.

Bollinger bands tightening were noted by analyst and trader Josh Rager yesterday who added that prices are also under the 20-day moving average.

Bbands pinching here, could only be a matter of days until the next volatile move pic.twitter.com/9qOk8LvzTb

“It’s under the 20MA, which is no certainty but tends to move downward in that case. But outside of that, there are multiple other reasons we could see down – Buyers really need to step in,”

Today Rager commented on volatility which is also down and has previously induced a larger move.

With a slow sideways market, we’ll see descending HV that indicates a strong reaction in price action ahead and rise in volatility pic.twitter.com/kee1IkjKBB

“As you can see with not only Bollinger bands but also historical volatility (HV) that a major move is brewing,”

Bitcoin dominance has been declining for the past two months and is currently at 68.5% according to Tradingview.com.

This is usually good news for altcoins but considering altseason has shown no signs of starting, they too are likely to dump in unison as they have done countless times before.

A glimmer of hope?

Not all analysts are totally bearish though. Granted, the technical indicators do not look good and the pressure is mounting on markets to make a move but as pointed out by Crypto Twitter user @galaxyBTC, Bitcoin has corrected by this amount countless times before in a bull market.

In bull markets $BTC drops 40% and then doubles its price. pic.twitter.com/E6zbjap6Av

At the time of writing, Bitcoin had pulled back by 42% from its all-time high as it fell below $8,000 during the morning’s Asian trading session.

The move has been largely predicted and it will remain range-bound until support at $7,700 collapses… which could be imminent.

The post Big bear signals mounting up – will Bitcoin dump this week? appeared first on Micky.