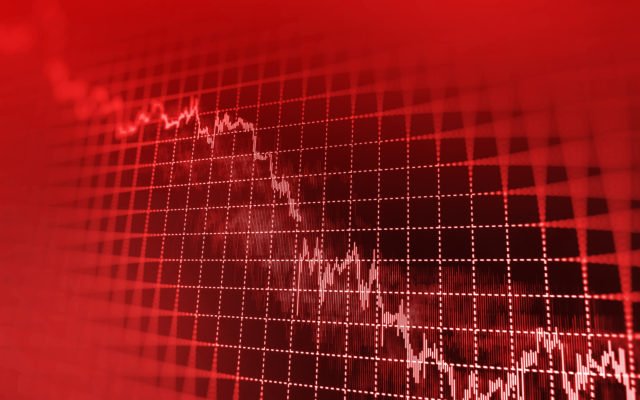 Bitcoin price crashed late Tuesday, losing over $1,000 in more than an hour. BTC has dropped over $1,200 in the last 24 hours, and investors are wondering where the next stop is.

Bitcoin has moved within a descending triangle, a pattern known to act as a bearish signal in technical analysis. However, some investors hoped that BTC would break up the resistance line, especially after the cryptocurrency has seen several highs moving higher than the upper line of the pattern.

Despite everything, our technical analyst suggested yesterday that bitcoin price would break below the support line and might even crash to $7,200, a scenario that is now even more plausible.

As per Coinmarketcap data, the BTC hit the daily low at $8,370, which is the lowest level since mid-June. Bitcoin has recovered some of the losses, so far gaining over $200, but has declined by over 12% in the last 24 hours, dragging the whole crypto market down. Elsewhere, Bitcoin Cash and EOS have dropped by over 28%, while Ethereum, Litecoin, Binance Coin, Stellar Lumens, Cardano, along with dozens of other coins, has demonstrated double-digit losses as well.

It’s worth mentioning that Bitcoin’s latest drop was preceded by a shocking flash crash in its hash rate, as shown by Blockchain.com data.

Bitcoin’s hash rate has tumbled about 40% on September 23, which is a record. The crash remains unexplained and surprising, given that the hash rate used to move upwards and update the record high again and again. This measure shows the mining difficulty, as the competition among BTC miners is increasing.

The answer might come from China, the home of several dominant mining entities. We reported that China was planning to remove crypto miners from its territory. However, the process hasn’t officially started yet.

Interestingly, the flash crash in the hash rate coincides with the UN Climate Action Summit, which took place from September 21 to 22. The event might have put pressure on miners, who often rely on dirty energy to generate new blocks.

Do you think Bitcoin price will break below the $8,000 level soon? Share your expectations in the comments section!

The post Bitcoin (BTC) Price Down to $8,500 After Hash Rate Crash appeared first on Bitcoinist.com.