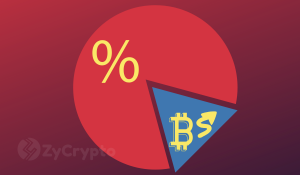 The hype cycle chart is a graphical illustration of the stages a new technology goes through from introduction, maturity to wide adoption. Bitcoin being a new technology conforms to this cycle. In its most basic form, the cycle has five stages.

They are technology trigger, the peak of inflated expectations, the trough of disillusionment, the slope of enlightenment, and finally plateau of productivity. Looking at the chart and given recent events around Bitcoin it’s easy to identify that Bitcoin is in the slope of enlightenment. However, it is important to identify that it’s in this stage with respect to adoption, not prices.

What Does It Mean To Be In The Slope Of Enlightenment?

This comes after three other stages; technology trigger, the peak of inflated expectations and trough of disillusionment. The technology trigger came back a few years ago when Bitcoin became popular among technology enthusiasts. This began in 2013 and continued all the way through 2015 and 2016.

The next stage was the peak of inflated expectations. This is when the hype is at an all-time high. People flock with high expectations and invest big money in the new technology and value explodes. This definitely happened towards the end of 2017 and in early 2018. In this period, Bitcoin shot from under $4,000 to $20,000.

This stage is followed by the trough of disillusionment. In this stage, prices crash as people realize that they don’t understand the new technology. The hype comes to an end and demand cannot match supply.

At this stage, there is no denying the technology is here to stay. With Bitcoin, in recent months we have seen more adoption than any other year. This has ranged from banks to governments.

Bitcoin’s recognition as a world-class digital asset has grown in the last couple of months, seeing wide adoption ever get closer. This is further evident with the chatter given to Bitcoin whether on social media or on mainstream media.

What To Expect With Bitcoin Prices

The last stage, the plateau of productivity will see the new technology working at its best with all fundamentals at their prime. For Bitcoin, this would be the digital asset replacing fiat.

With recent data showing that there are only 25 million bitcoin users globally, there is a long way to go in the slope of enlightenment stage. Nevertheless, this is a vital stage for prices, the asset is on the launch pad.

The post Bitcoin’s Position In The Hype Cycle Chart Might Help Predict Where Prices Are Headed appeared first on ZyCrypto.