Just as things were starting to look bearish again and momentum was running thin a weekend rally has set the crypto bulls in motion once again. Positive sentiment has returned to the scene as talk of a ‘Santa rally’ gets bandied about and Bitcoin reclaims $9,000.

Following a Friday dump, Bitcoin spent most of the weekend lulling around the $8,800 level. Bearish sentiment started to creep in with analysts eyeing a further drop to $8,600 or lower. In late trading on Sunday things turned bullish as BTC powered back above $9k.

The single hourly candle tapped $9,150 on the 200 hour moving average before a slight pull back to $9,050. The 3% move has kept Bitcoin within its range bound channel again as analysts eye new triangle formations.

There may be a few more days of consolidation before the apex of this triangle which is likely to induce a larger move.

Trader and analyst ‘The Cryptomist’ has depicted a falling wedge but is bearish in the longer term with a prediction of a low to $7k.

“Mentioned warning of the falling wedge earlier. We are now testing resistance of the wedge … After this bull momentum is over, I do expect 7.1k still,”

If we breakout here, 9.2 region remains first target, then 9.4k

Still chance of support test before breakout at 8.3k region

After this bull momentum is over, I do expect 7.1k still pic.twitter.com/RioawGMuyR 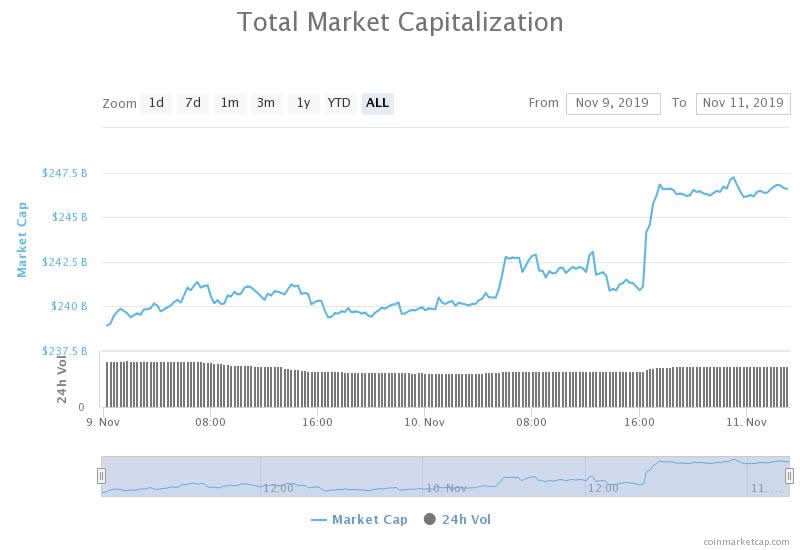 Ethereum is slowly creeping towards the $200 barrier and has gained 3% on the day to reach and hold $190. ETH market cap is back over $20 billion and further gains are looking likely as analysts remain bullish.

Ripple’s XRP token is getting left behind however and remains flat on the day just over $0.28. Last week’s Swell even did nothing for XRP prices which actually declined by almost 10%.

A couple of lower cap altcoins are having double digit gains at the moment and they include VeChain, DxChain and ODEM. In general there is much more green than red on the charts this morning as crypto assets build on last week’s gains.

Sentiment is generally bullish but the larger picture still shows consolidation from a downtrend that began in July. The question now is; will there be a big Santa rally for crypto assets.