NFT archaeology is an exciting quest to find the first in different categories. And it appears that we have another contender. Before, CryptoFighters was considered to be the first Play to Earn a game, it’s contract deployed on 22 Jan, 2018. However, we have now established there was something even earlier – beating the earlier record by 24 days. Enter CryptoBots – a NFT project so ahead of it’s time that it’s astonishing. Special thanks to Twitter user @nick123.eth for allowing us to reference his research found here and Discord user @0xCurator for assisting with the research.

CryptoBots contract was deployed on Dec 29, 2017. According to the official description: “CryptoBots is a collector’s blockchain game created by Playneta Studio. Playneta is a mobile game development studio. The company was founded in 2015 by Shikharev Semyon. The bottom line of the game is quite simple; Build the best Bot army in the world: Procure some Bots and start forming your army. Improve your army through clever manufacturing, recycling, buying and selling. Battle test your new Bot army. Dominate the world.”

It offers players the ability to collect and trade unique collectible bots on the Ethereum blockchain. The users could acquire, auction, mix / match from the smart contract and pitch them against each other. CryptoBots had on-chain fighting / competition mechanism and the first battle occurred on Feb 03, 2018 beating the earlier record of CryptoFighters on Feb 20, 2018 by 17 days. However, the original game doesn’t exist anymore.

CryptoBots have a supply cap of 9341 unique bots and no new bots can be minted. The last bots minting was in 2018 and the contract appears to have been paused by the deployer. They have randomly generated traits and come with a sequence identifier. There are 24 generations in total, varying in rarity and generally increasing with the later generations. However, the generations aren’t proportional to the dates minted, but rather signify the bot mixing. The rarity charts can be seen below: @0xCurator on Discord and @nick.123

The official bot production procedure was described as follows:

The production process of a new bot:
● Take two bots and manufacture a new one by means of combining their bot-DNA.
● You get a new bot with unique 256 bit long DNA sequence, obtained from a mixture of the genotypes from its progenitors and random mutations.
● The DNA of the new bot determines the set of modules which it consists of, as well as future production opportunities.
● Right after the production, the new Bot’s progenitors can’t make a new offspring. It takes a while for them to cool down.
● As Bots are used for manufacturing, the speed of production of new bots derived from each progenitor reduces. 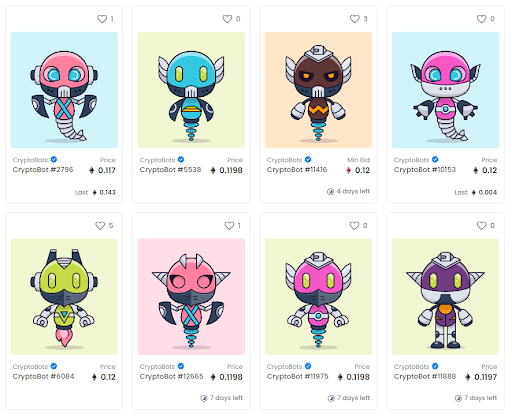 The pretty aesthetics of the bots are just one part of the equation though as CryptoBots featured capabilities vastly ahead of this time and what would have made for a killer Play to Earn NFT project today. From the old documentation, the game featured battles/tournaments and had a proper leader-board. The tournaments featured prizes more than 2-5 ETH and it is believed that almost 14 tournaments were held, before the game shut down for unknown reasons. 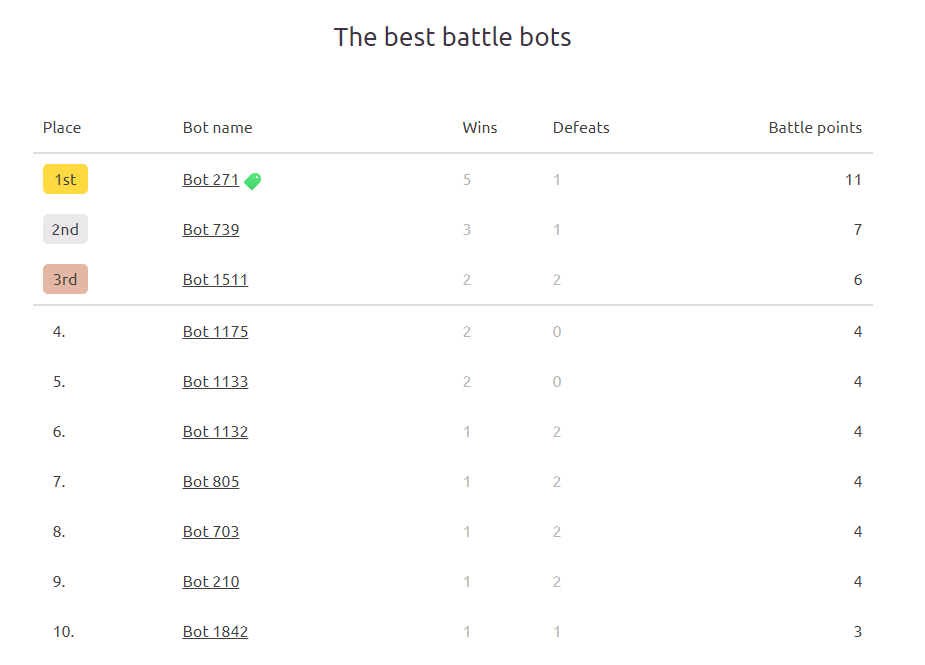 Regarding battles, the official source noted: “Battles are CryptoBots’ special game mechanics . You put your bot forward for a battle against the other players’ bots. As a reward, the winner receives a new bot with a unique module!” Apparently, the outcome of the bot fights depended on the bot strength, modules and the multiplier of battle strength. Interesting and sophisticated, especially for it’s time! 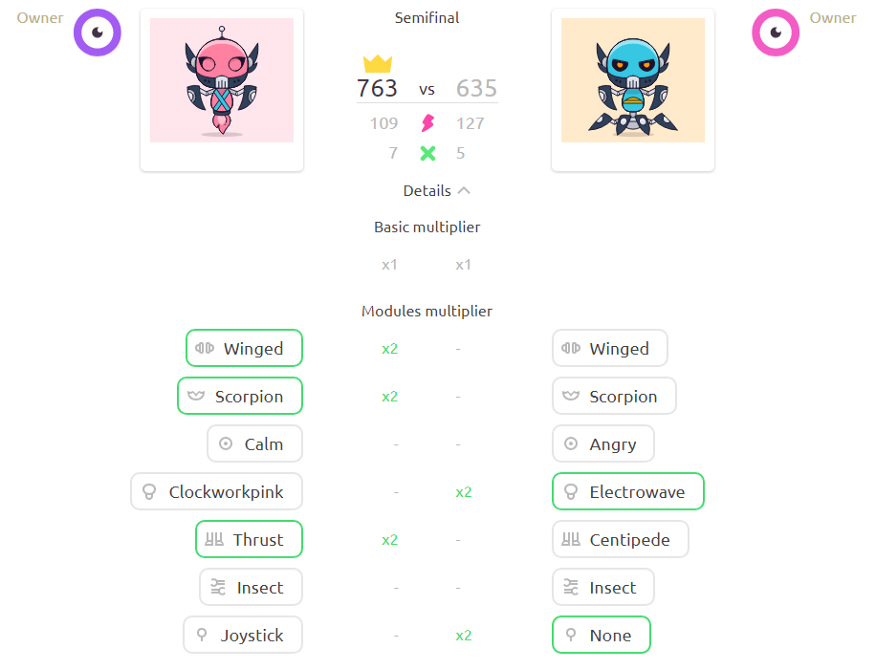 It also featured an on-chain auction system and a way to generate new bots / recycle existing ones. There was also a cool down period to ensure that the bots were well rested before procreating further! CryptoBots team thought that the aim of the game was very simple:

The team also introduced the native token CBTB for in-game payments, loot boxes were featured, items introduced and special event drops were a norm. CryptoBots featured unique mechanics, complicated game play and great graphics for it’s time. The only mystery at this point is why a great game like CryptoBots wasn’t very successful back in 2017-2018 and had to shut down. 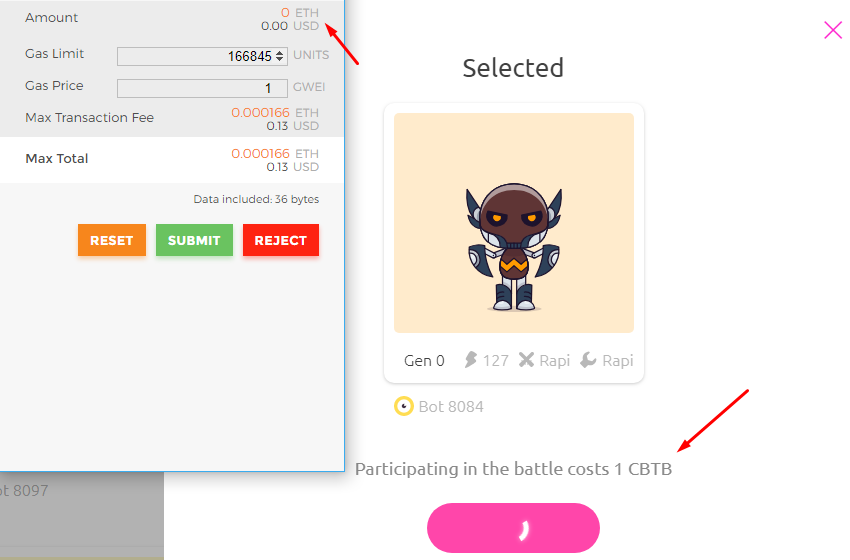 CryptoBots was also featured in the mainstream media of it’s time and several reviews were available. The team’s Q&A session on Reddit also hints at great development plans, which appear to have been abruptly halted. In it’s article titled “After CryptoKitties, the ‘Cryptocollectibles’ Business Is Booming” the VICE mentioned about CryptoBots that

“CryptoBots is the creation of Russia-based game studio Playneta. Like CryptoPets, it combines the cute collectibles of CryptoKitties with a game that has players duke it out. As of this writing, a new tournament is in play on the CryptoBots website, with a prize of 10 ether (ETH), presently worth $3,682.50.

The game has close to 10,000 users and “averages about 150 signups a day,” CryptoBots producer Alexander Rog told Motherboard. It has earned about 150 ETH total (at time of writing, $57,901 USD) from sales of base-level CryptoBots, a 3 percent fee for all subsequent bot sales, and 0.01 ETH fee taken from players participating in battles. The most expensive bot is named Bot Master, and it sold for 10 ETH, or $4,050″.

The post CryptoBots – An Overview Of The First Play to Earn NFT appeared first on CryptoTicker.