The crypto community has been buzzing throughout the past couple of weeks as Bitcoin and the aggregated market show signs of life.

Following a multi-month bout of sideways trading within the lower-$9,000 region, BTC bulls finally awoke and drove the crypto past $10,000. From here, it rapidly soared to highs of $12,000 before its ascent slowed.

The crypto is now consolidating within the mid-$11,000 region as bulls vie to break above this newly established resistance.

Despite possibly being in the early stages of the next full-blown bull market, public interest in Bitcoin and other crypto topics remains incredibly low.

This is clearly illustrated while looking towards Google Trend data regarding crypto-related keywords.

Because new retail investors clearly aren’t backing this move, what is?

Bitcoin is currently trading up significantly from where it was just a few weeks ago, and unlike rallies seen in years past, this one appears to be more sustainable.

The cryptocurrency is also trading positively against a backdrop of economic weakness, high unemployment, and unprecedented government spending – bolstering the narrative regarding its safe-haven status.

In the past few months, it has even received some high-profile endorsements from the likes of Paul Tudor Jones regarding it being a hedge against imminent inflation.

Nevertheless, the general public still remains uninterested in Bitcoin and other cryptocurrencies.

This is a positive sign for investors, as it suggests that the next wave of retail frenzy could propel BTC far past its 2017 highs of $20,000. 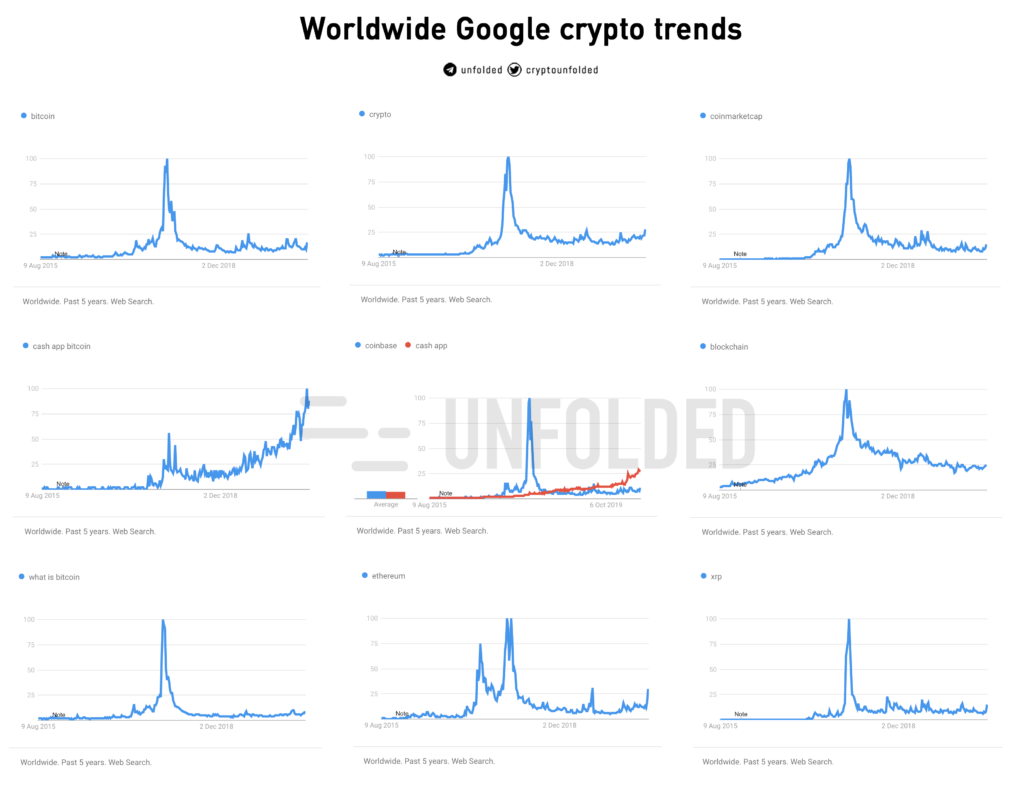 As seen on the graphic, search volumes for all of the major terms still remain relatively stagnant – despite the ongoing uptrend.

The predominant forces driving Bitcoin and the crypto market have shifted significantly throughout the past few years.

Although in 2017 retail investors wielded absolute control over BTC, it now appears that the digital asset’s price action is being driven primarily by its relation to other markets.

In a chart recently published by an analyst, it appears that Bitcoin now has an inverse correlation to the US Dollar.

As the USD continues sliding in value due to massive money printing and a weakening economy, it is possible that this will help to direct value to hard assets like gold and Bitcoin.

Once BTC approaches its 2017 highs, it will likely spark another wave of retail frenzy that helps drive its price even higher, with it now being far more fundamentally robust than it was in years prior.

The post Data shows public interest in Bitcoin is low: Here’s what may be driving BTC higher appeared first on CryptoSlate.