Bitcoin’s latest price slump wiped out over $100 million in value from MicroStrategy’s crypto portfolio. However, despite suffering devastating losses in the past 24 hours, the company is still up almost 50 percent the 38,250 BTC it bought this year, showing that there’s no place for weak hands in billion-dollar NASDAQ companies.

A billion-dollar company with a Bitcoin treasury

Despite being a billion-dollar NASDAQ-listed company, MicroStrategy wasn’t a household name for many in the crypto industry. However, all of that changed when the company announced that it had invested a total of $425 million in bitcoin this year, acquiring 38,250 BTC across several months.

The company shared its new investment plan with the SEC, saying that its treasury will consist of two types of assets, one of them being Bitcoin. The world’s largest digital currency is set to serve as the primary treasury reserve asset on an ongoing basis, the company said, adding that it might be used for future potential share repurchasing.

Given the fact that the company acquired the 38,250 BTC for an average purchase price of $11,111 per coin, Bitcoin’s massive rally to $19,400 this week meant that the company’s portfolio was, at one point, worth over $724 million. Recording a 75 percent increase, MicroStrategy’s Bitcoin investment was touted by many as extremely bullish for the market.

Even with $120M wiped out from its portfolio, MicroStrategy is still up 50% on BTC

However, Bitcoin’s massive slump has drastically affected its portfolio, with the company recording a loss of over $100 million in a single day.

Worth $742 million on Nov. 25, MicroStrategy’s Bitcoin investment slumped to just $621 million when Bitcoin’s price dropped to $16,260 at one point today. 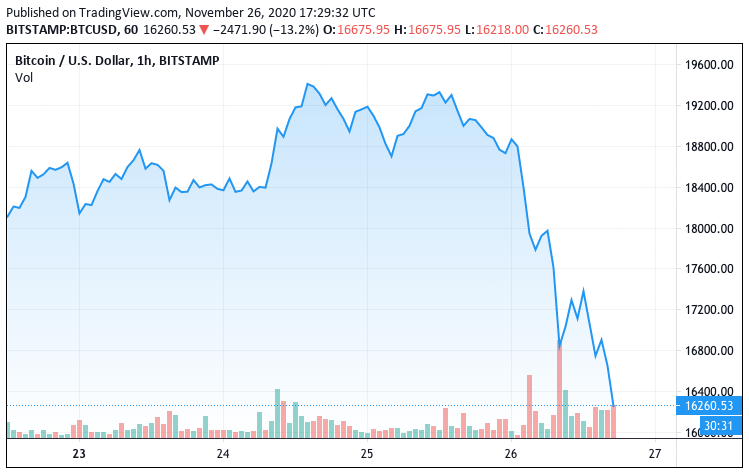 With $120 million wiped out from its portfolio, the public began labeling MicroStrategy as one of the biggest losers of the day in terms of aggregate sum lost.

However, even with such a massive loss, the company’s investment in an asset as risky as Bitcoin turned out to be a smart decision overall. Given the fact that the company acquired most of its Bitcoin holdings at an average price of $11,111 per coin, Bitcoin’s slump to $16,260 has put the company’s portfolio gains at only 46 percent. 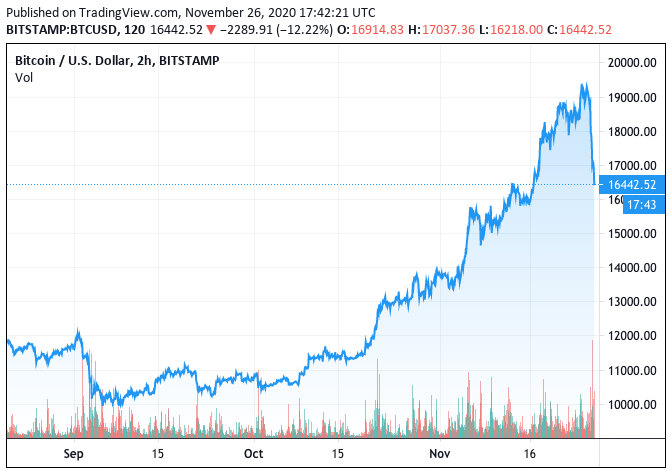 Screengrab showing Bitcoin’s price on Bitstamp from September to November.

The post Despite losing $120M in a day, MicroStrategy is still up on its Bitcoin investment appeared first on CryptoSlate.