Craig Wright has just filed 428 mystery Tulip Trust documents in court. Did the key to Satoshi’s billions arrive or is it another a delaying tactic?

The man who claims to have invented Bitcoin, Dr Craig S Wright, has just filed 428 new documents including a ‘Tulip Trust III’ to a Florida Court.

Wright is being sued by the estate of his former business partner Dave Kleiman for half of the million or so Bitcoin the pair allegedly mined together.

The January 6 court filing caused consternation for Kleiman’s legal team who said the documents were provided “without any explanation of its late disclosure or even an email pointing ou this document had been produced.”

They have agreed Wright should be able to redact some information but do not want the documents ‘sealed’ in its entirety. 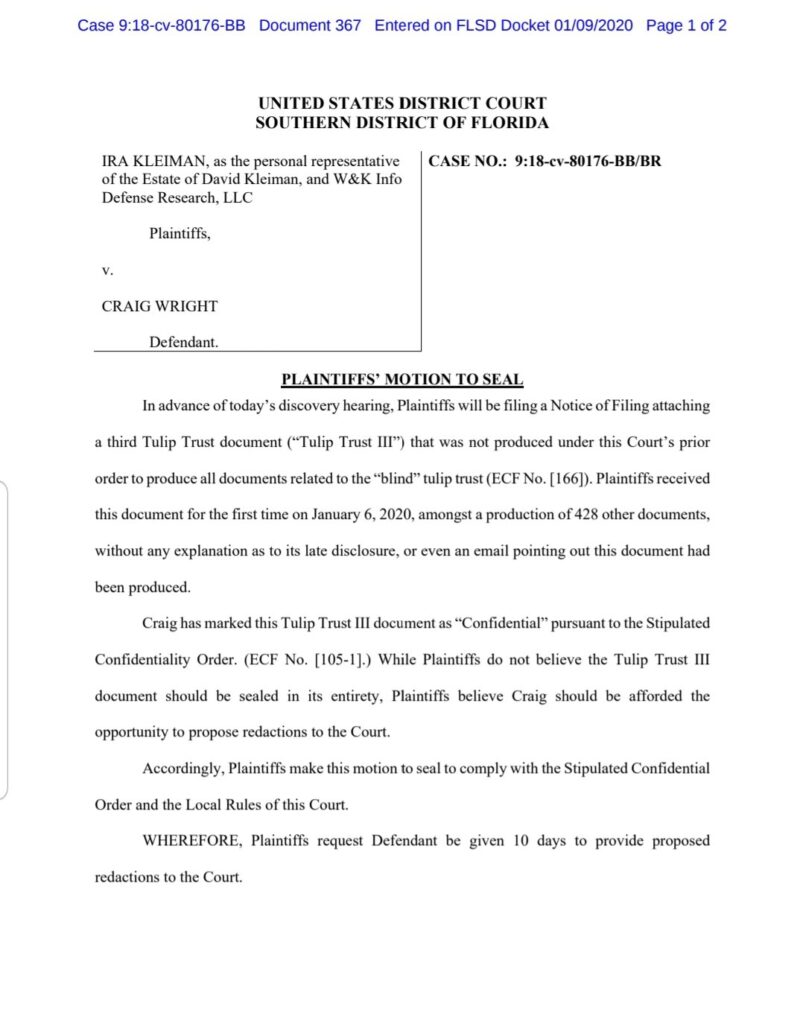 What does this mean for Satoshi’s hoard of Bitcoin?

For those who came in late, the ‘Tulip Trust’ is Wright’s explanation for why he was unable to provide the court with a list of his Bitcoin holdings – or indeed to prove to the court there was any mined Bitcoin at all.

The story – which would seem far fetched in a film – goes like this: the million or so Bitcoin was deposited into the ‘Tulip Trust’ which was encrypted with ‘Shamir’s Secret Sharing Algorithm’ with the passkey divided into a bunch of different slices.

The ‘slice’ enabling Wright to unlock the Tulip Trust, recover the Bitcoin (then possibly destroy BTC in favour of BSV) was given to a ‘bonded courier’ who was due to turn up a decade later on January 1 this year.

So your interpretation of Wright’s latest court filing – five days after the bonded courier was due to arrive – will be affected by how much credibility you assign to Wright.

For BSV supporters, it’s make or break time, and this could be proof that Wright really is Satoshi Nakamoto and that BSV really is the ‘One True Bitcoin’.

(Incidentally, next month’s BSV Genesis Hard Fork is set to strip out a lot of the alterations to the Bitcoin code, and bring it back into line with what they claim was Satoshi’s original vision for Bitcoin).

“OMG!!! A third Tulip Trust document “not produced under the Court’s prior order”, received by the Plaintiffs for the first time on January 6, 2020…
COULD THIS BE THE KEYS TO THE TULIP TRUST???” asked @SirToshiTV.

OMG!!! A third Tulip Trust document “not produced under the Court’s prior order”, received by the Plaintiffs for the first time on January 6, 2020…
COULD THIS BE THE KEYS TO THE TULIP TRUST???

The ramifications of Wright gaining access to the billions would be enormous.

In August, when the Judge ruled he needed to hand over half the Bitcoin to Kleiman’s estate (estimated at 550,000 BTC) he said the estate would need to sell $2 billion worth to cover the tax bill which would tank the Bitcoin market.

(And yes, Federal estate tax in US is payable in certain circumstances when the money is received).

For those who think Wright is Faketoshi, this is yet more dissembling and B.S. to string out the case a bit further before it and BSV inevitably collapses.

Podcaster Peter McCormack, who Wright is suing for libel for calling him a fraud, posted a screenshot of the court filing saying simply: “Seems legit”.

Judge is probably leaning to the ‘Faketoshi’ side

It’s worth pointing out that while the judge in the case made an order giving half the mined Bitcoin to the Kleiman estate, he doesn’t necessarily accept there EVEN IS any Bitcoin.

He doesn’t have much faith in Wright’s truth telling abilities, finding he had lied, potentially falsified documents, and concocted a frankly “inconceivable” story.

“The totality of the evidence in the record does not substantiate that the Tulip Trust exists,” said Judge Reinhart. “Wright’s testimony that this trust exists was intentionally false”

Wright also released a statement in late December dampening down expectations he’d actually receive the keys to the Satoshi wallets:

“I believe I will receive information in January 2020 that will enable us to identify coins I mined into my companies in 2009 and 2010, but cannot be certain that all of that information will in fact arrive.

“I have not said the private keys to those coins would become available, or if so, actually used, in January 2020. In the next few weeks, we will be holding trust meetings and working out the next steps going forward in 2020.”

The post Did the key to Satoshi’s Bitcoin billions just turn up? (Or is it B.S?) appeared first on Micky.