If you’ve browsed Crypto Twitter over recent weeks, you likely know of a project called MEME.

The platform, which allows users to generate and swap digital cards/art pieces of some popular individuals in the Ethereum space, has rapidly risen to prominence as a place where traders can blow some excess cash. 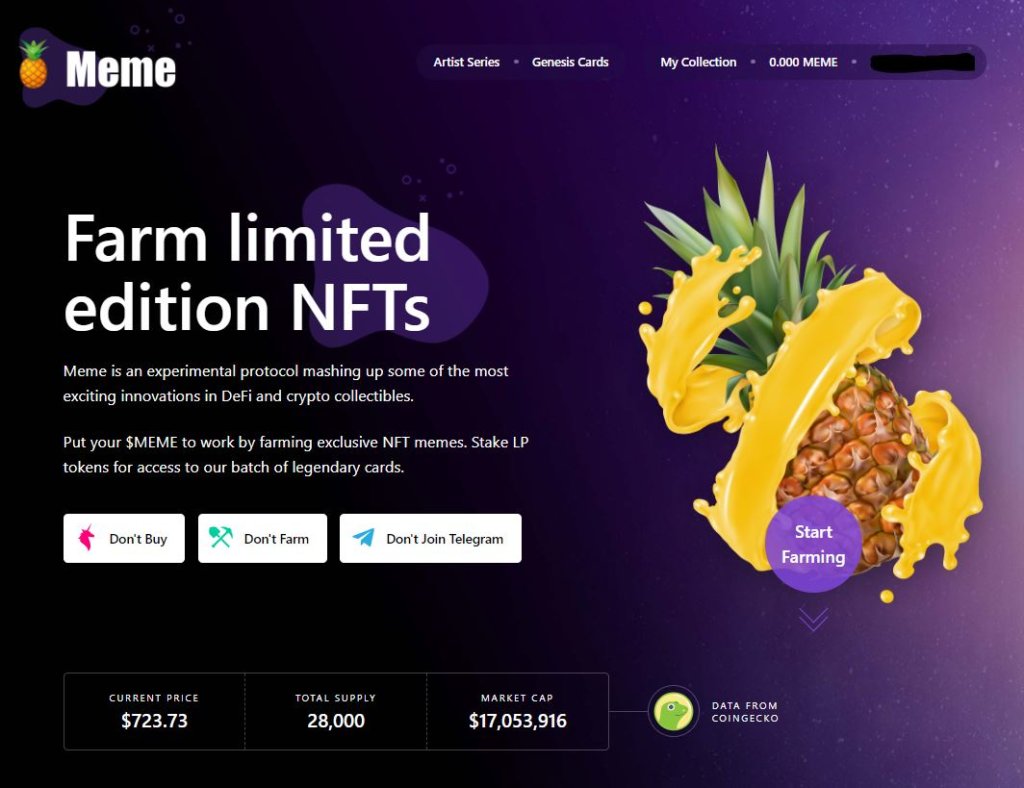 And can you really blame them? Through MEME, you can collect Ethereum-based cards of individuals like Yearn.finance’s Andre Cronje, FTX’s Sam Bankman Fried, Uniswap’s Hayden Adams, and others, which then can be flipped on secondary markets for a handful of ETH.

Holders of the Cronje card, for instance, are being offered upwards of $4,000 on these secondary markets.

But behind this platform is an interesting story — the story of how 50-odd users were gifted cryptocurrencies worth over $500,000 as of recent highs.

We covered it earlier this year but it’s worth telling it again.

The story of MEME

MEME launched as a joke, plain and simple.

After developers released a flurry of food-themed coins on Ethereum to capture the then-craze, ConsenSys‘ Jordan Lyall, as a joke, posted the image seen below. It shows a mockup of a platform where any user can generate forks of their favorite DeFi protocols with their own twist and theme.

Spin up a new #DeFi project in as little as 5 minutes! pic.twitter.com/qpiod6uqSf

Again, it was a joke. But some thought otherwise, creating a Telegram group whose premise was to — well potentially to —  launch the platform that Lyall envisioned.

Quickly, a token was decided on: the four or five dozen users in the group were allowed to enter an Ethereum address into a Google Form distributed in the Telegram group. “DeFi Dude,” a commentator in the space, commented after the event:

“The community decided on 28,000 total supply, and it should be airdropped to members in the telegram. And so it did. After $400 in gas costs, $MEME was deployed and airdropped to 50 or so participants, each receiving 355 $MEME.”

Chat history only goes back so far but at one point, the group decided to pivot MEME into the digital art/trading card phenomenon we see today.

This was a good choice: at the recent highs as per CoinGecko, MEME traded for $2,000, basically meaning that users who received the original airdrop and held all the way through were gifted $700,000 worth of Ethereum tokens for free.

Unfortunately for members of the “Citadel,” as the original group members call themselves, not everyone held. A few users like Anthony Sassano and Sam Ratnakar lamented how they sold most/all of their coins when it began trading at around $10.

The reason for MEME’s recent growth is the rise in digital art.

As reported by CryptoSlate previously, users are regularly paying thousands of dollars for jpgs and gifs as whales, seemingly, cycle their profits from their yield farming adventures into more esoteric assets.

The post How 50 individuals got over $500,000 in Ethereum tokens for free: MEME appeared first on CryptoSlate.