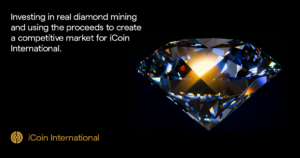 ICoin International is run by Millenium Mining Corporation and the project is focused on leveraging distributed ledger technology (DLT) and AI to deliver transparency, efficiency, and speed to the precious stones industry.

ICoin is collaborating with LATOKEN exchange to launch its IEO for early backers to support its development and growth.

It’s no news that diamonds are one of the most sought after precious stones in the world due to their usefulness in both the industrial and social sectors.

Their beauty comes into play in the production of aesthetic jewelry and they also hold the record of being one of the hardest naturally occurring materials.

Despite the excellent properties of diamond, the lack of a proper monitoring system has made transparent and effective mining and distribution of this gem almost impossible, with draconian government policies further fueling illegal distribution of diamonds.

iCoin is looking to tokenize the diamond mining ecosystem and put in place a well-structured, real-time monitoring and auditing system powered by new technologies like AI and blockchain technology.

iCoin will create a holistic business environment for diamonds to thrive and blossom into a new economy.

With blockchain and AI, iCoin aims to build a trustless and incorruptible network, create a system that uses smart contracts to execute transactions in real-time, foster transparency in all financial transactions and more.

Each diamond extraction will be time-stamped on the blockchain, making it entirely traceable throughout the supply chain.

Millennium Mining Corporation is located in diamond-rich Sierra Leone which exported over 15 million USD worth of diamonds in 2018.

Millenium Mining Corporation has carried out several tests in Baimbawai Pool in the Sewa River. Based on geological surveys, it is estimated that the pool contains about 1.5 million cubic meters of diamond-bearing gravel of high quality, ranging from 0.2 to 0.5 carat per cubic meter.

In total, it is estimated that there are between 200k to 750k carats of diamond in the pool and previous mining operations in the region has achieved as high as 4 carats per cubic meter.

There are only 600 million ICOIN tokens ever to be minted and 10,000 tokens will be sold during the IEO at a price of $1 per token and a minimum investment of $100 per investor.

Investors can purchase the ICOIN tokens with bitcoin (BTC), Ether (ETH) or USD through the Latoken exchange.

Investors will be able to receive and trade their ICOIN tokens immediately after the IEO.

The raised funds will be used to finance the diamond mining operation and support the iCoin ecosystem.