Chainlink (LINK) has seen a huge influx of new money lately, with its native cryptocurrency LINK reaching an all-time high of $8.23. The rally was accompanied by a slew of major announcements from Chainlink, which partnered with several new DeFi projects and is set to hold an action-packed virtual summit focused on smart contracts at the end of August.

Chainlink investors seem to be suffering from a serious case of FOMO, as they managed to pump the platform’s native token to its all-time high in a rather dull and uninspiring market. While the decentralized oracle provider has been on everyone’s radar this year thanks to partnerships with Google and Oracle, it doesn’t look like the investors are too concerned about what the company actually does.

According to Cryptoslate data, LINK saw its price increase over 59 percent this past week. The 7-day pump pushed the coin all the way up to its all-time high of $8.23 earlier today. 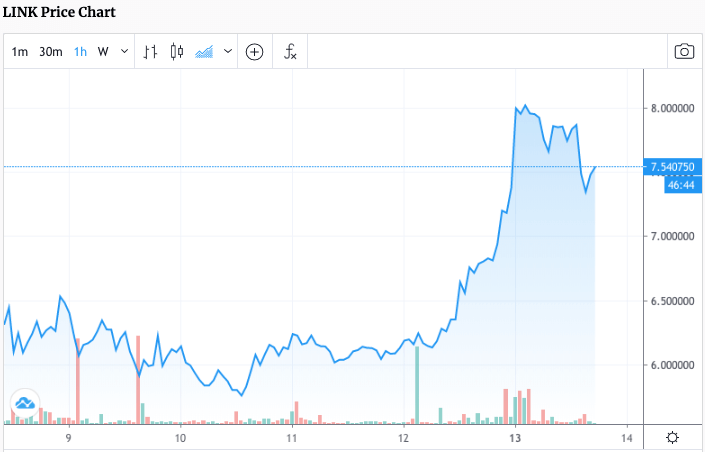 While there’s a myriad of different factors that could have caused LINK’s incredible rally, one seems to stand out—retail investors.

Chart showing the classification of Chainlink addresses by the time they hold LINK. (Source: IntoTheBlock)

Chainlink’s partnerships with companies such as Google have led many to anticipate that it would be institutional money that would propel LINK to great heights. This belief was backed with major developments coming from Chainlink—in its weekly update, Chainlink announced several new partnerships.

Aside from partnerships with upcoming DeFi protocols and platforms, Chainlink has also been busy with its upcoming virtual summit. Announced yesterday, the company’s first-ever Smart Contract Virtual Summit (SmartCon) will take place on Aug. 28 and 29 and focus heavily on smart contracts and the people behind them.