Cryptocurrency research firm Tulip Research has found an alarming number of inconsistencies in Kuailian, a masternode startup that has raised more than $100 million from investors. The company mainly targets the Latin American market, offering a monthly ROI of between 6 and 17 percent for members of its ecosystem.

Kuilian, a company providing software that operates masternodes for various cryptocurrencies is most likely an elaborate Ponzi scheme, the latest report from Tulip Research has shown.

Kuilian has targeted mainly the Spanish-speaking market, investing heavily in marketing in Latin America and Spain. The company claims that they sell licenses for a private software that operates masternodes within a “smart pool” that’s based on advanced machine learning.

The very description of the company raised many red flags with Tulip Research, with its analysts diving deep into the company’s suspicious business model. According to their report, Kuilian requires users to pay an “activation/membership” fee of $50 in order to access the Kuilian “ecosystem.” After that, users have to pay an equivalent of $100 in ETH for every license, with the company offering a Low Risk (LR) and Medium Risk (MR) licenses.

“If we do not take [into] consideration [the] compound interest, the return of investment per year is 60-72 percent and 180-204 percent depending on the license.”

When considering compound interest, the annual return of investment rises to 200 percent and 658 percent, while the total profit generated after the 1,000 day period could be as high as 28,489 percent with the medium risk license.

The company claims that it implements machine learning in order to select Masternodes with the highest risk/return ratios. However, the report noted that all information pertaining to Masternodes is public and doesn’t change overnight, so there is no need for an advanced algorithm.

Moreover, the information listed on the company’s website that lists information about the masternodes that are implemented by Buailian’s “smart pool” is mostly fake. 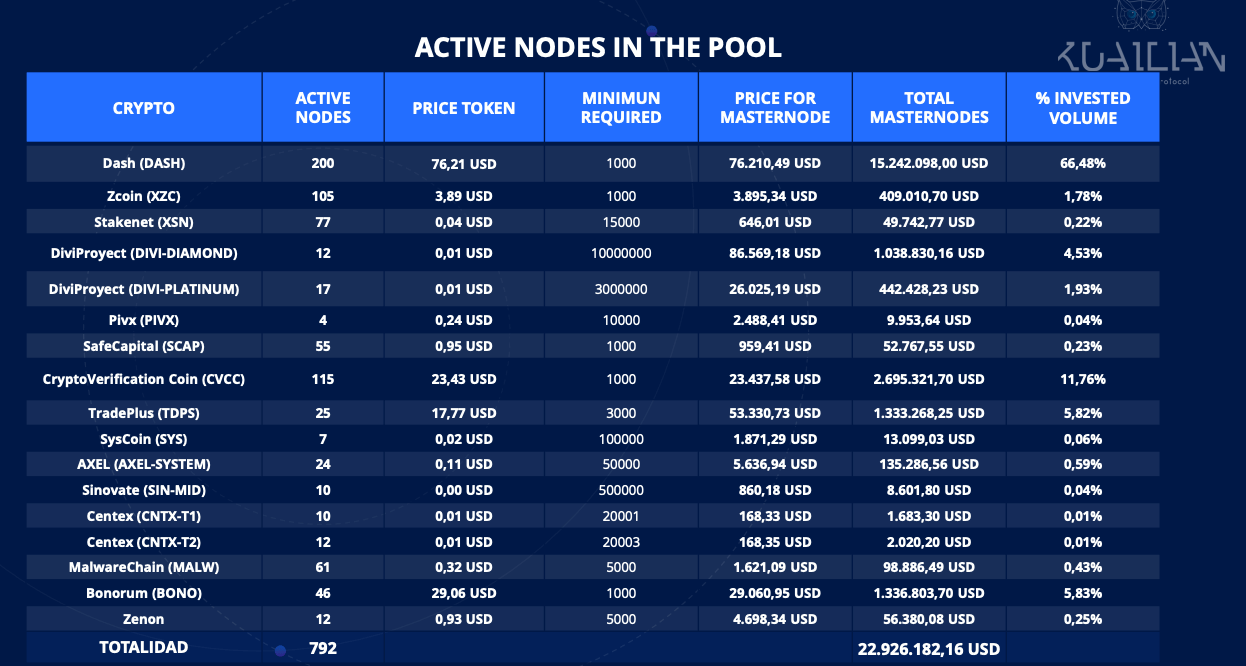 Most of the coins whose masternodes are run by Kuailian have very low liquidity. Take for example CryptoVerificationCoin (CVCC): the company allocated 11.76 percent of their investors capital to implement masternodes of CVCC. A CVCC masternode requires 1,000 CVCC, while the company claims to have 115 masternodes.

That amount, according to Tulip Research, is almost 15 times larger than the sum of all buying orders for CVCC on the entire crypto market. While this makes Kuailian’s data implausible, a direct statement from a CVCC representative shows that it’s almost certainly false—Tulip Research cited a CVCC representative by the name of Dennis as saying that Kuailian doesn’t own a single node of CVCC.

This scenario repeats itself for almost every other cryptocurrency they list. The very existence of the company is also questionable, as the report uncovered that Kuailian was registered in Estonia in February this year, despite operating for months before that.

Surely enough, diving deeper showed that all of the investors’ money ends up in a centralized exchange—Kraken, while all profits that are distributed to users come from Binance.

Diagram showing the distribution of money in the Kuailian ecosystem (Source: Tulip Research)

All of this has led Tulip Research to conclude that even if Kuailian isn’t an outright Ponzi scheme, it certainly presents an alarming number of inconsistencies in its business practice, which suggests that they might be using masternodes as a smokescreen for fraudulent activities. The company has so far received 442,687 ETH from 32,841 investors, which is an equivalent of around $100 million.