Synthetix – the leading derivatives protocol on the Ethereum network and a pioneer in DeFi launched a new year 2021 roadmap on 12th Jan. It lists key agendas and development guidelines, which are likely to shape the direction of the protocol in this year. These are of course subject to approval through decentralized on-chain governance.

I just published Synthetix 2021. Which is nothing more than a veiled attempt to cling to a sense of power in this ever more decentralized world. https://t.co/qCaWwGqBzI

The list is extensive but focuses mostly on Layer 2 integrations, the launch of Synthetix v3 and Synthetix futures, increasing the assets available on the platform (especially equities etc.), beginning of acquisitions, enhancements to binary options, protocol governance optimization and dApp upgrades / general improvements. 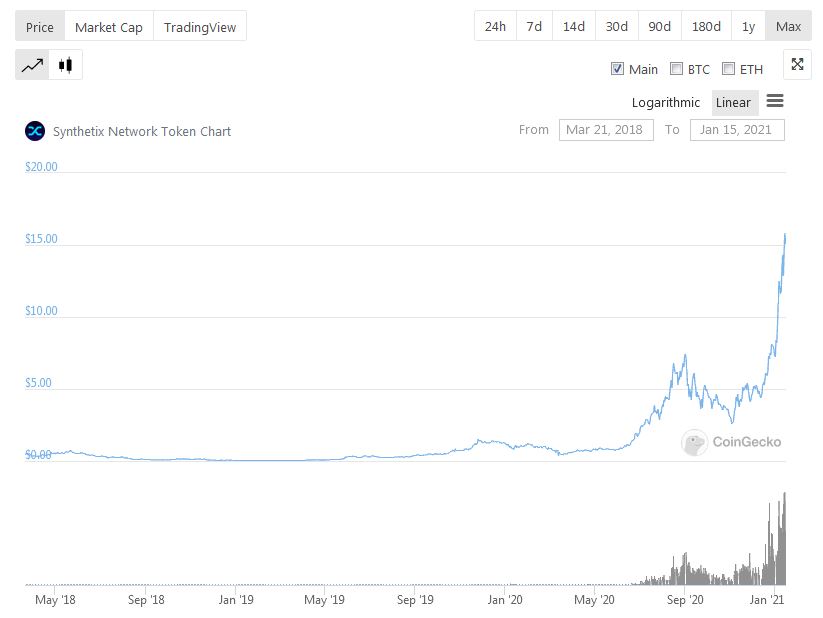 Once implemented in full, it has the potential to bridge the gap between traditional finance and decentralized finance. It will also revolutionize the entire DeFi field and return immense value to the native SNX token holders. It’s expected that most of the checklist here would have been implemented by mid 2021.

So what’s cooking in the Synthetix kitchen? First and foremost, there is an immediate need and plans to switch over to Optimism Layer 2 scaling solution. The integration will begin by Jan 15, but is likely to take some time before the full functionality can be enabled over the Layer 2 network. There is an urgent need to do so, because of the Ethereum network congestion causing high fees and delays in transaction processing.

Check out the transition plan for Synthetix migrating to OΞ. https://t.co/TC10WpvhWQ

This in turn worsens the Synthetix user’s experience, who have to time their activity and only choose to execute the most necessary of operations otherwise. The transition comes with it’s own challenges, however the Synthetix team is confident that they can make it as smooth as possible by implementing the change in phases.

This year will also see the launch of the third iteration of the Synthetix protocol – namely the v3. Synthetix v3 will require old token holders to migrate to new contracts, so that the new system can be designed from zero and cleaned of the unoptimized contracts. It will also allow the new system to let go of the backwards compatibility and enable more powerful intuitive features.

The new upgrade is expected to bring new SNX staking mechanism (which requires users to send SNX to a contract), creation of eSNX to mitigate the effect of 1-yr SNX rewards locking (so that users can have more flexibility), tokenized representation of debt (easily transferable without the need for constant unstaking), introduction of continuous vesting schedules and continuous staling rewards (based on time than snapshot balances).

Synthetix V3 is a ground up rewrite of the entire contract suite that will allow us to escape the last two years of accumulated tech debt, by removing backwards compatibility and requiring user migration we can reduce complexity and deliver a number of new features.

Synthetix v3 will also bring open interest caps (security feature to limit number of mintable Synths to safeguard against flash loan and other attacks), limit orders with an order matching system, splitting of the debt pool into different asset classes (giving users more choices) and price threshold mechanism (protection against volatility so that order isn’t executed if price moves much)

Asset expansion is critical to growing the network, this will likely include more crypto, commodities and FX but most importantly I expect the Spartan Council is likely to request Chainlink provide equities feeds as soon as they take control of the SIP process.

It also introduces order matching for assets whose markets don’t operate 24/7 (through counterparty mode with traders matching orders against each other allowing non-stop equities etc. trading) and Keep3r implementation (delegation of certain tasks to the Keep3r network).

A long awaited feature of the Synthetix protocol is the futures initiative. They are generally found on centralized exchanges, because of the rapid price updates and fast order matching. It wasn’t possible in the past because of issues with price oracles and slow execution speed of the Ethereum base layer.

Synthetic Futures are finally coming, it has taken much longer to get the infrastructure in place to support leverage, but one of the first releases of the year will be a testnet for futures.

As Synthetix integrates Chainlink oracles and Optimism Ethereum Layer 2, there is no technical limitation to the futures launch and it would offer a minimum of 10x leverage. Synthetix Futures can allow the protocol to compete effectively with centralized exchanges.