So-called “Crypto Twitter” has been enthralled by a widely circulated “money printer go brrr” meme that takes aim at the government’s incessant money printing, with many crypto enthusiasts pointing to the Fed’s current monetary policies as the reason why Bitcoin is so important.

Despite of these massive monetary injections that are – at least partially – fueled by money printing that inflates the US Dollar’s supply, the currency has been able to see some notable strength in recent times.

This has led some prominent commentators to note that the narrative regarding this money printing being bullish for Bitcoin and bearish for the US Dollar is being invalidated.

Although the short-term impacts of this loose monetary policy may not be fazing economists, investors, and even forex traders, the long-term case for the importance of a decentralized digital currency like Bitcoin is still incredibly strong.

The recent economic damage created by the Coronavirus has led governments around the world, but especially the U.S. government, to take unprecedented actions to curb the economic impacts of this pandemic.

These actions have required trillions of dollars’ worth of funding, leading to the resurgence in anti-fiat sentiment from those critical about the economic impacts of the massive inflation caused by creating currency out of thin air.

In spite of this, it doesn’t appear that there have been any short-term implications of this economic activity, with one popular Bitcoin commentator noting that USD’s value has actually grown.

“They printed $6 trillion out of thin air and the value of the USD went… UP. Let that sink in. How’s that narrative working out for you?” 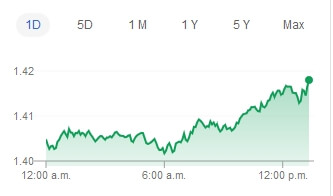 Although those holding and interacting with US Dollars may not be seeing any immediate implications of the Federal Reserve’s massive spending, it still highlights the need for a decentralized currency like Bitcoin – even if it damages the Bitcoin narrative in the short-term.

As previously reported by CryptoSlate, the Fed Chairman recently admitted in the interview that the central bank essentially has unlimited spending power, which was a harrowing statement that elucidated the inherent lack of value that unbacked fiat currencies have.

Eventually, it is highly probable that massive inflation of fiat currencies will eventually strike a major blow to the traditional financial system as we know at, with scarce cryptocurrencies like Bitcoin providing viable alternatives to fiat currencies.