What leads the institutions of higher learning to harbor such resentment toward the technology?

Academia is no fan of Bitcoin. The vast majority of professors are hugely biased against it. For example, Professor of Economics Nouriel Roubini of New York University doesn’t even try to hide his intense hatred for Bitcoin. Roubini told Bloomberg that “the Flintstones had a better monetary system than bitcoin” and has repeatedly called it a “bubble” since 2015. When asked to give expert testimony to the U.S. Senate, Roubini called Bitcoin “the mother of all scams” and smeared all its supporters as “scammers, swindlers, criminals, charlatans, insider whales and carnival barkers.”

Roubini is far from unique among academics in his disdain for Bitcoin. Prominent academic economists are nearly universal in their dismissal of Bitcoin. Few professors have deeply studied Bitcoin and even fewer really understand it; yet, many professors have ruled Bitcoin out.

I recently had the immense honor and pleasure of presenting to the HxEconomics Community, a group facilitated by Heterodox Academy, an organization of university professors, students and staff “committed to enhancing the quality of research and education by promoting open inquiry, viewpoint diversity, and constructive disagreement in institutions of higher learning.” As a testament to living their values, the economics discussion group graciously invited me, a nonacademic without any special credentials to present, to a panel titled, “Overlooked Orthodoxy, Academia’s Bias Against Bitcoin.” In the fruitful informal discussion that followed, the small group of professors and students agreed my thesis was likely true: There is an inherent bias in academia and the economic body of research/theories it produces in favor of supporting a “fiat” or managed monetary system and against Bitcoin specifically.

Why Bitcoin specifically? Bitcoin is a set of rules without rulers, it’s just a protocol. Bitcoin is unique among cryptocurrencies in that it’s laser-focused on being unstoppable (through decentralization and game theory) and consistent (in supply schedule, economic and consensus rules, uptime, and treatment of participants). Bitcoin knows no favorites; it treats teens from Nigeria the same as powerful members of the Federal Reserve. Bitcoin is by far the least stoppable and most consistent money that can be used online due to its decentralization, network effects, developmental stage, ethos and lack of leadership.

Bitcoiners love this lack of control over Bitcoin because it keeps the system from being fixed in favor of the already rich and powerful. Within fiat, on the other hand, there is a well-observed phenomenon of those with control over the money supply disproportionately allocating new money to those they favor (the elite): It’s known as the Cantillon effect and exacerbates inequality. However, most of academia views the fiat system of centralized control over money to be legitimate, good and necessary. Academics tend to disagree with the view of many Bitcoiners that economist Friedrich von Hayek expressed in his 1974 acceptance speech for the Nobel prize:

“To act on the belief that we possess the knowledge and the power which enable us to shape the processes of society entirely to our liking, knowledge which in fact we do not possess, is likely to make us do much harm.”

Academics often disregard Hayek’s concerns and pin their hopes on monetary authorities to make interventions for the greater good. Academics usually prefer a managed economy, believing the fiat system with its central authorities will lessen recessions and depressions. Managed money gives governments and their advisors and unelected monetary managers the ability to respond to changes in the world with changes to the money supply, interest rate, and so on. In fact, Roubini complains of too little central control in fiat due to the use of cash and desires for yet more power to authorities over people’s money, “If you phase out cash … then the negative interest rate in a severe recession or depression can go to -1, -2, -3, -4, -5(%) whatever you want it to be … that’s the direction we’re going to go.”

Thus, academia fails to grasp the main value proposition of Bitcoin: its lack of central management, lack of control by any party. Bitcoin takes away the ability of central planners to set the rules of a market, allocate money as they see fit in an economy, confiscate wealth from citizens, and prevent the transfer of funds (or financially censor anyone).

Why do academics want so much power in the hands of central planners given their vulnerability to corruption, misunderstandings and power consolidation? Why don’t academics often discuss inherent fiat system risks such as totalitarianism through money control and kleptocratic or unfair actions by those managing money?

Because academics are the planners! Academics benefit hugely from centralized fiat money systems through employment opportunities as decision-makers, advisors or researchers for said system. Decentralized Bitcoin is a unique threat to the centralized control over the fiat monetary system by unelected officials. “Expert” unelected officials exert control over our global monetary system through various mechanisms such as the allocation of enormous newly printed sums of wealth to favored nations, programs and enterprises, as well as altering interest rates. Unelected central planners also choose who may or may not access markets to acquire resources for themselves and their families through organizations like the Financial Action Task Force (FATF), giving or withholding loans and aid, and more.

There is a revolving door between academics and positions of power as central economic planners at institutions like the Federal Reserve, the International Monetary Fund (IMF), World Economic Forum (WEF) and the World Bank. For example, Roubini has worked for decades in academia but currently also advises the IMF, Bretton Woods Committee and more and has previously held positions at the Federal Reserve, World Bank and advising the U.S. government. Central planning of the financial system means more power for Roubini, his colleagues and the many organizations that pay and empower them. Pictured below are just a few of the staggering number of academics who have attained positions of significant power, prestige and financial reward as unelected managers or advisors of the fiat money system. 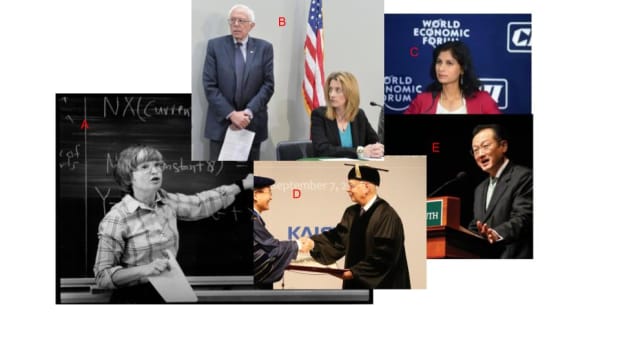 A. Janet Yellen spent decades in academia and became Federal Reserve chair and U.S. Secretary of the Treasury. B. Stefanie Kelton is a current professor at Stony Brook University whose work in Modern Monetary Theory heavily influences Democrats like Bernie Sanders. C. Gita Gopinath took leave of public service from Harvard University to be the chief economist of the International Monetary Fund. She also works for the National Bureau of Economic Research and the Federal Reserve. D. The founder and executive chairman of the World Economic Forum, Klaus Schwab had a long and distinctive academic career. E. Jim Yong Kim is the former president of Dartmouth College who went on to be the president of the World Bank.

There is an unacknowledged conflict of interest in academia: Since academics are the central planners, they are incentivized to come to research conclusions that advocate heavy central planning. As trusted experts, academic economists are the managers of the global fiat system and thus often blind to the drawbacks and risks associated with trusting our monetary system to fallible central managers at all.

Even professors who are not involved or looking to be involved in managing or advising the fiat monetary system have pressure to support it. Fiat monetary organizations empower their colleagues (and thus universities generally) and frequently provide research funding to economics departments. There is enormous pressure within academia to conform in supporting the fiat system. Professor Ashley Hodgson, who leads regular discussion groups with academic economists across the country through Heterodox Academy, explains:

“In any large organization where the relationships within the organization are social, there is a political element. You have to be sensitive to what offends your colleagues, what offends your superiors. There is a social and professional benefit to staying on everybody’s good side. In academia especially the currency we trade in is prestige rather than money… People take a pay cut relative to what they could get outside of academia in order to climb this ladder of prestige and intellectualism … Academics have to be sensitive to the fact that their credibility could be questioned if they say things that offend people in influential circles … In academia, people’s ideas are what they take pride in: that is their identity. So criticizing their ideas has a higher chance of causing genuine offense in the academic setting. That means if you want to climb up in the hierarchy of academia you need to be careful about criticizing ideas, especially ideas of people who are at the top of their fields, who make decisions…”

Thus, academic economists are hesitant to criticize the fiat system, since their most esteemed colleagues are its central planners. Bitcoin takes away academic economists’ ability to influence the monetary system, greatly reducing their relevance, prestige, power and thus funding.

Moreover, universities benefit from the fiat system’s easy money policies through government grants and tuition money (taking out debt favored in inflationary environments like the fiat system). The economists and papers academia produces are thus biased in support of inflationary fiat systems. It’s no wonder why so many academics vociferously oppose Bitcoin and advocate central planners having control over the global monetary system. Note: I am by no means calling economic professors evil. All humans have a tendency to be biased toward their incentives. If universities only had Bitcoiners not employed in the fiat system as professors, they would also be biased. But that is far from the case, instead they have nearly no Bitcoin supporters among them.

There is an unacknowledged conflict of interest in academia: Since academics are the central planners they are incentivized to come to research conclusions that advocate heavy central planning. Academia today is inherently and highly biased against Bitcoin. It is high time we recognize said bias and take steps to correct it.

This is a guest post by Hannah Wolfman-Jones. Opinions expressed are entirely their own and do not necessarily reflect those of BTC Inc. or Bitcoin Magazine.