The Ethereum price is up 96 percent in the last 53 days from $116 to $228. Traders foresee ETH to be one of the top performers in 2020 if the current upsurge turns into a full-blown rally.

Throughout the past month, Ethereum has front-run the market. Before the Bitcoin price started its run to $10,000, ETH continued to demonstrate a vertical rally with every dip being bought at a rapid rate.

One cryptocurrency trader known as Satoshi Flipper said that when the volume of a crypto asset is on the rise in tandem with price, it generally indicates an optimistic short to medium-term trend. He said.

Other prominent cryptocurrency technical analysts have also focused on Ethereum in the recent rally, adding that ETH is likely to outperform the rest of the market.

Aside from fundamentals, Ethereum broke out of a multi-year resistance area at $210. It surged past a significant area of trading interest much faster than Bitcoin.

As Ethereum showed a sign of a parabolic rally for the first time since May 2019, it triggered fear of missing out (FOMO) in the market and drove larger demand for it. Another reason for its stronger performance in comparison to other cryptocurrencies is its price trend since 2017.

Since its record high at $1,400, the Ethereum price dropped by more than 90 percent up until last month. Even after its near two-fold increase in price, it is still down by 84 percent from its all-time high.

When an asset is that oversold, a breakout of a multi-year downtrend typically invokes a major reaction from the market. More importantly, major altcoins like Ethereum were heavily shorted in the final months of 2019.

“The class of 2018 traders who only traded a bear market are going to have a tough time trading this bull market. They are simple wired to trade one way (thanks largely in part to thin paid group university curriculum they studied) and I’ve seen how stubborn some of them are.”

Data indicates that the interest in Ethereum is consistently increasing day by day. Researchers at Skew said that the total open interest for ETH is at $600 million, a six month high. 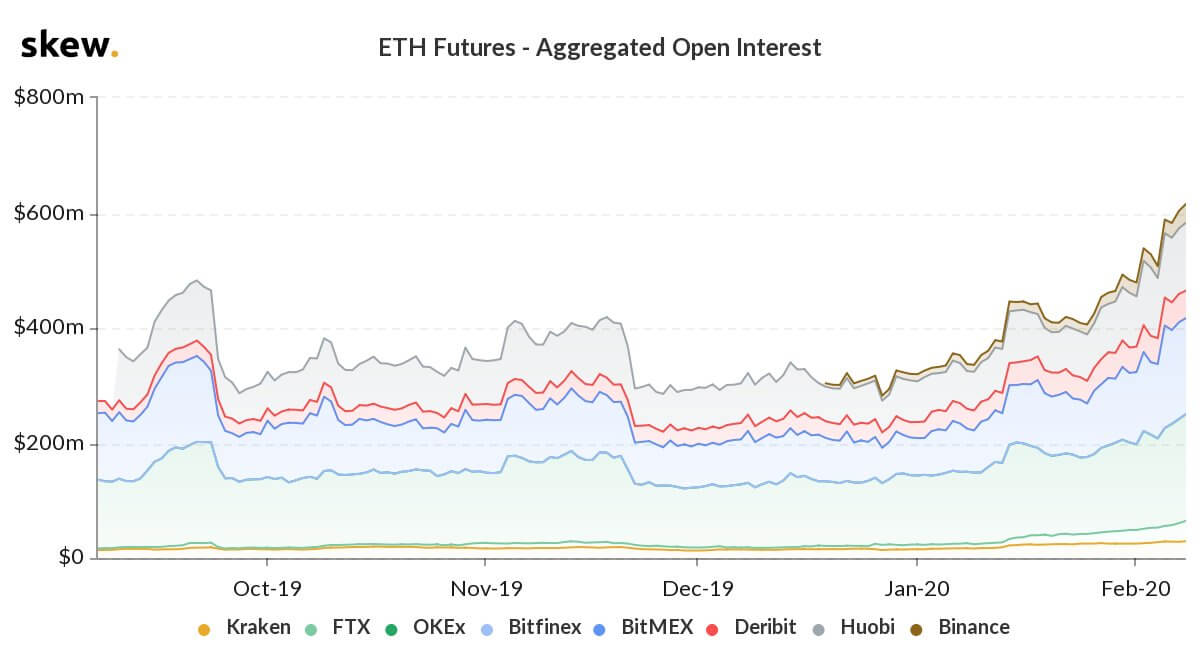 Open interest in futures trading refers to the total amount of long and short contracts open in the market at a given time. It shows many traders are trading ETH following its rally.

Fundamentals are backing up the ETH rally

Prior to the explosive growth of decentralized finance (DeFi), there were not many factors that could justify a high market valuation for Ethereum.

In February 2020, the total amount of money involved in DeFi on top of Ethereum surpassed $1 billion, opening ETH to an actual real-world use case for adoption.

The post Why some traders believe Ethereum will see the biggest upsurge in the 2020 bull market appeared first on CryptoSlate.