A further $6 billion has been added to total crypto market capitalization over the past 24 years and it is altcoins that are leading the gains. A big dose of Chinese FOMO boosted home grown projects there and Stellar’s coin burn is igniting some them this morning, but are they destined to dump again?

Total market cap reached $253 billion a few hours ago which is the highest it has been for a week. The bigger picture shows more range bound trading but altcoins appear to be driving momentum at the moment. 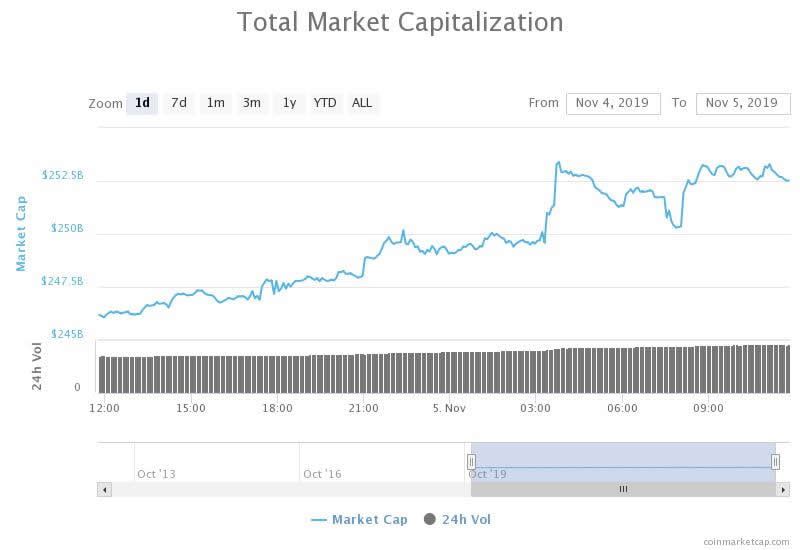 The chart also indicates that daily volume has climbed almost 30% since the beginning of the week as everything looks green at the moment. Trader ‘Paddy Stash’ has noted the increase in altcoin dominance over the past week as BTC failed to top 70% and has started to decline in terms of market share.

“Altcoin dominance has continued to climb back upwards since the big $Btc spike from $7.4 to over $10k last week.”

Altcoin dominance has continued to climb back upwards since the big $Btc spike from $7.4 to over $10k last week. $ETH just jumped from $181 to a high of $188 just a few hours ago. ALts all look ready to move again. Lets see Big alts and Chinese alts blow up and bring the rest up pic.twitter.com/QIIcZvh32D

While the ‘China effect’ heavily influenced the prices of NEO, Tron, Qtum, VeChain, Bytom and other local blockchain platforms last week, others are getting a lift today.

Something called ParallelCoin is looking very spurious at the moment as CMC is reporting a 7,000% surge for DUO tokens. ‘Crypto Bitlord’ has called it a dangerous pump and dump scheme which should be avoided.

This tactic was common in the early days.

A group would buy all of the coin supply and then buy it up to do something stupid like this.

Noobs would buy and lose everything. Do not, and I mean DO NOT buy anything like this

Another altcoin having a serious pump at the moment is Stellar as the Foundation just burnt 55 billion uncirculated XLM tokens. The crypto community is skeptical however and the 25% price pump has already started to fall off.

Stellar is currently priced at just over $0.08 and has knocked Tron back out of the top ten with a market cap of $1.6 billion. Ripple’s XRP got a related pump at the same time of just over 4% which takes the token back over $0.30 where it faces heavy resistance. This week’s Swell event could help XRP to break through that though.

BSV and Cardano have gained over 5% a piece in the past few hours and Cosmos has cranked 12% as it reaches $3.80. The two Chinese altcoins VeChain and Qtum are also going strong today with 7% gained.

Bitcoin has made minor gains to reach resistance at $9,400 again but until it surges back into five figures the altcoins are unlikely to climb any higher. It is still likely that a dump will follow whatever gains altcoins have made today as altseason is still a long way away.

The post Altcoins Leading Crypto Market Gains, Are Pump And Dumps Back? appeared first on NewsBTC.