Bitcoin recently broke below the bottom of the symmetrical triangle on its 4-hour time frame, possibly leading to a drop that’s the same height as the chart formation. In addition, the price also broke below the rising trend line support that’s been holding since mid-July.

The 100 SMA is below the longer-term 200 SMA to indicate that the path of least resistance is to the downside. In other words, the selloff is more likely to gain traction than to reverse. Price is moving below both moving averages to signal that these might hold as dynamic resistance levels.

RSI is heading lower but already seems to be dipping into the oversold region to signal that bullish momentum is exhausted. Turning back up could show that buyers are getting ready to return. Stochastic is heading down to indicate that sellers are still in control and have a bit of room to go before reaching the oversold region. 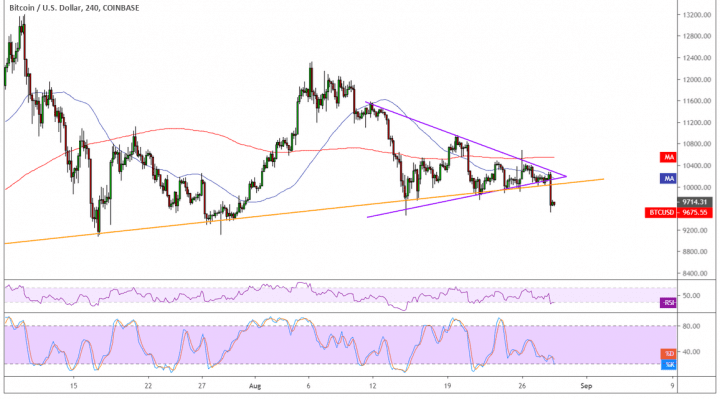 Price also seems to be forming a bearish flag after its recent sharp drop, signaling that a slide of the same height as the mast is in the works. The triangle spans $9,675 to $11,600 so the resulting slide could be of the same size.

Many say that the drop has been spurred by news that China is gearing up to make its own cryptocurrency, possibly leading bitcoin and other altcoins to lose their biggest market. This could undermine any big gains in volumes as the Bakkt launch approaches next month, although it could take time before any state-owned cryptocurrency could gain traction.

Still, bitcoin has a lot to look forward to, including the “halvening” next year. However, the momentum from the sharp drop, which follows the coin’s difficulty in making new highs over the past month might be enough to draw even stronger selling pressure.