After a strong upward momentum pumped its price by more than $500, Bitcoin has returned to trading in an increasingly bearish zone below the $10,350 resistance. Despite a long-term bullish outlook, BTC could see its price decline sharply if it breaks the $10,000 support.

The world’s largest cryptocurrency saw a massive spike in activity over the past few weeks, experiencing only a few minor dips below the $10,000 support.

Bitcoin saw its price rise almost five percent last week, which served as a good foundation for the massive gains the coin recorded this week.

The relatively tight trading range saw a serious expansion on Monday when it rose above its 100-hour simple moving average (SMA) and surpassed the $10,400 mark.

The jump pumped Bitcoin’s price by more than $500, topping it out near $10,680. However, the quick rise was followed by an equally quick decline, with the price bottoming at $10,175 in less than 4 hours. 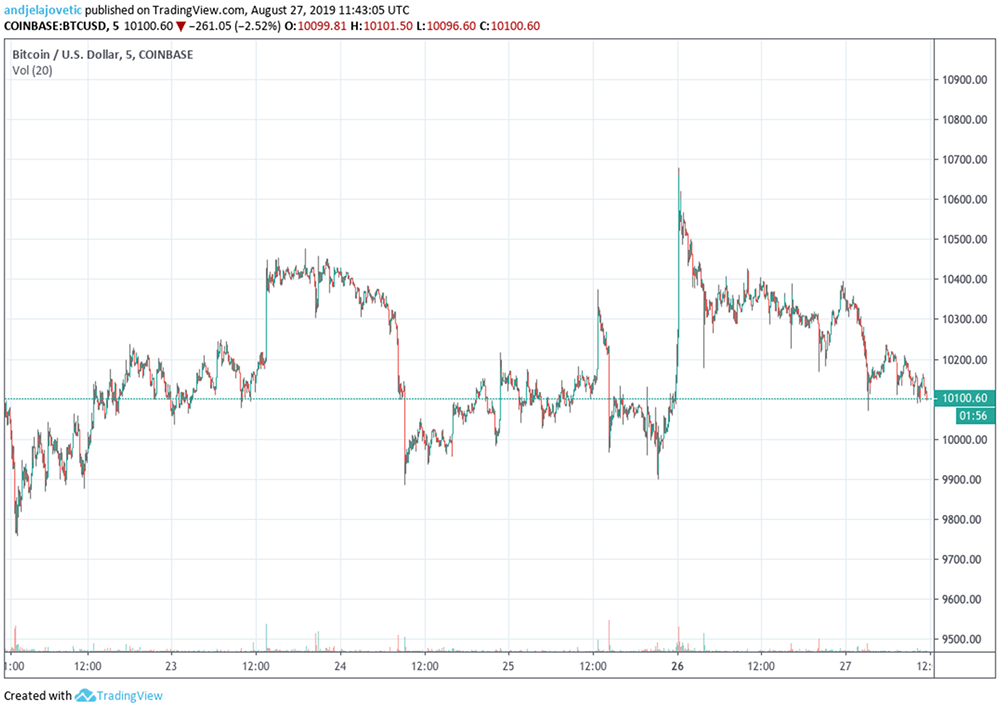 As it moved back into the bearish zone, Bitcoin went back below the 100-hour simple moving average and formed a strong resistance at $10,200.

Bitcoin trading in a symmetrical triangle pointing towards a surge

While it might seem that Bitcoin is becoming increasingly volatile, the coin is actually trading inside a symmetrical triangle.

As a symmetrical triangle is often regarded as a continuation pattern, the bullish bias that began earlier this month has the potential to extend well into September.

If Bitcoin’s price breaks out of the triangle, the upward trend that started at the beginning of August will most likely resume.

The tension and uncertainty brought by Bitcoin’s latest drop weren’t enough to discourage some of the most vocal bulls, many of whom have doubled down and used the opportunity to buy.

Johnny Moe, a cryptocurrency analyst, said that he expected Bitcoin to drop well below its current value, but that the market will continue to stay bullish in the long-run.

The desc. triangle is garbage and this is a symmetrical triangle, indicating a bias towards bullish continuation.

The large consolidation under the .618? It’s just a logical place to see resistance before heading higher.

He explained that the symmetrical triangle indicates a strong bias towards a bullish continuation and that a drop below $10,000 is a “logical place to see resistance” before the price increases.

However, Biran Kelly, investor and author of The Bitcoin Big Bang, seemed to be more guarded.

In an interview with CNBC’s Fast Money, Kelly said he believes Bitcoin’s price got “a little ahead of itself” and that he would be “a little bit cautious” in the short-term.

#Bitcoin is back above $10k, but @BKBrianKelly is feeling a little bearish. Here’s why. pic.twitter.com/J5uf9ahq1x

On the other hand, he remained optimistic in the long-term, saying a ‘generational opportunity’ to buy Bitcoin might not be far away.