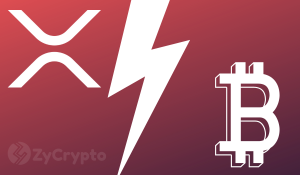 The past week has clearly shown which cryptocurrencies are recovering from the latest crash and which aren’t. Bitcoin is definitely struggling to see a convincing bounce and it’s only trading at $8170, still 19% down.

Bitcoin has experienced 2 lower drops after the initial crash touched $7800. Two days later, Bitcoin dropped lower at $7750 and then even lower down to $7710.

This wasn’t the case with Ripple’s (XRP) as the bulls have been able to hold the initial low of the crash. They have been in fact, able to set higher lows almost every day, creating a pretty strong uptrend.

According to the trading legend, Peter Brandt, this is not a coincidence and shows that XRP bottomed against Bitcoin. Peter simply tweeted a graph showing the daily chart of XRP/BTC and people quickly reacted to it.

There is some chart evidence that $XRP is bottoming against $BTC $XRPBTC pic.twitter.com/TfvIbClTdP

In the graph, we can clearly see that XRP has created a really strong uptrend currently trading above both EMAs which have crossed bullish range weeks ago. This Bullish cross was really significant as we haven’t seen it in over 7 months.

On the weekly chart, XRP has been able to break above the 12-period EMA but it’s important to note that this doesn’t change the downtrend in any way. The bulls of XRP still need to set a higher low compared to 0.00002365 and then a higher high to confirm an uptrend.

Zooming out, even more, the monthly chart is certainly not very bullish, at all. The XRP/BTC pair has been in a downtrend since 2018 and these few recent bullish moves are clearly not going to change that. The volume is also not amazing and the RSI is not overextended.

The short-term does look pretty good for XRP but it’s definitely too early to call the recent bottom the final one as XRP bulls still need to prove themselves in a big way on the longer timeframes.

Do you think XRP will keep its momentum against Bitcoin?