After facing a prolonged bout of sideways trading, Ethereum has now found itself caught within the throes of an intense uptrend that came about suddenly yesterday.

As buyers step up and catalyze some notable momentum, it now appears that bulls are making a bid at revisiting its 2020 highs that were set in February around $290.

The current price level that ETH is pushing against is historically significant and may prove to be difficult to surmount.

After setting its 2020 highs in February, the cryptocurrency faced a harsh rejection that caused it to decline to the sub-$100 region in mid-March.

There are a few factors that appear to be driving the ongoing upswing, including a recent trendline break and a plethora of bullish narratives.

Over the past couple of months, the Ethereum-based DeFi sector has been seeing tremendous growth.

This has caused many of the ERC-20 tokens related to this fragment of the market to post massive gains and drive a tremendous quantity of users and traffic to the ETH network.

Although previously this wasn’t providing the cryptocurrency with any upwards momentum, it appears that the narrative regarding DeFi eventually leading Ethereum to accrue value is starting to bear fruit.

At the time of writing, Ethereum is trading up over five percent at its current price of $278. This marks a notable surge from its recent low of $240 that was set just over a day ago.

This momentum first kicked off yesterday afternoon when the crypto’s price was hovering within the lower-$240 region. Buyers were able to push it as high as $265 before it met some resistance that slowed its ascent.

From here, it consolidated overnight before starting another leg higher that led it up to a high of $281.

Other narratives that could bolster its price action down the line is the potential implementation of EIP-1559 and the transition to ETH 2.0 – which could optimistically come as early as November of this year.

From a technical perspective, one factor that could help drive Ethereum’s price higher is a recent trendline break that it was able to post.

This trendline has been formed and respected since late-June of 2019, and this is the first time its price has rallied above it.

One respected pseudonymous trader who posts under the moniker “Lucid” spoke about this in a recent tweet, concluding that it now makes it so that all trades should be long-biased. 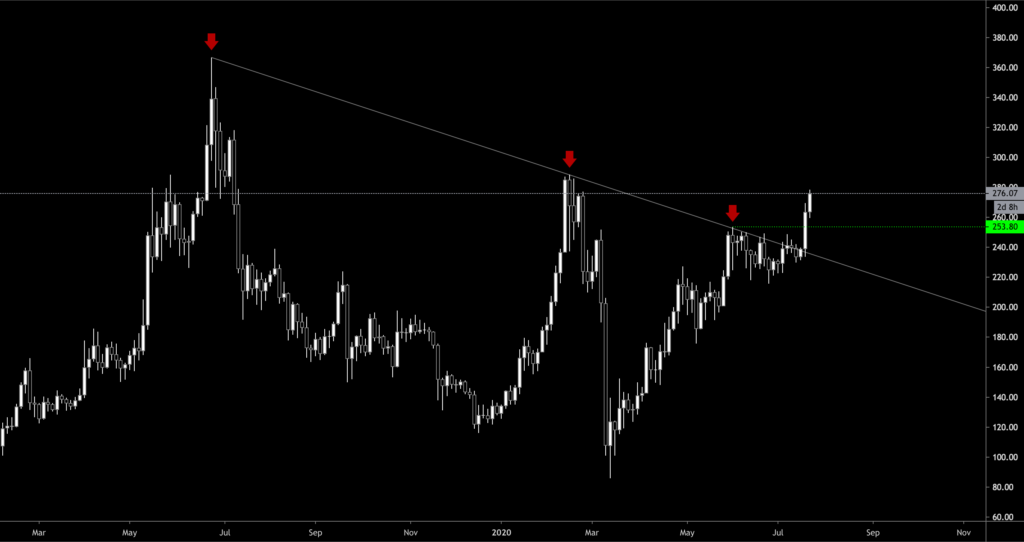 The confluence of multiple bullish narratives and a strong technical outlook does seem to bode well for Ethereum’s mid-term outlook.

The post These factors could be behind Ethereum’s intense rally to $280 appeared first on CryptoSlate.